Who are the five best rookies in WNBA history? 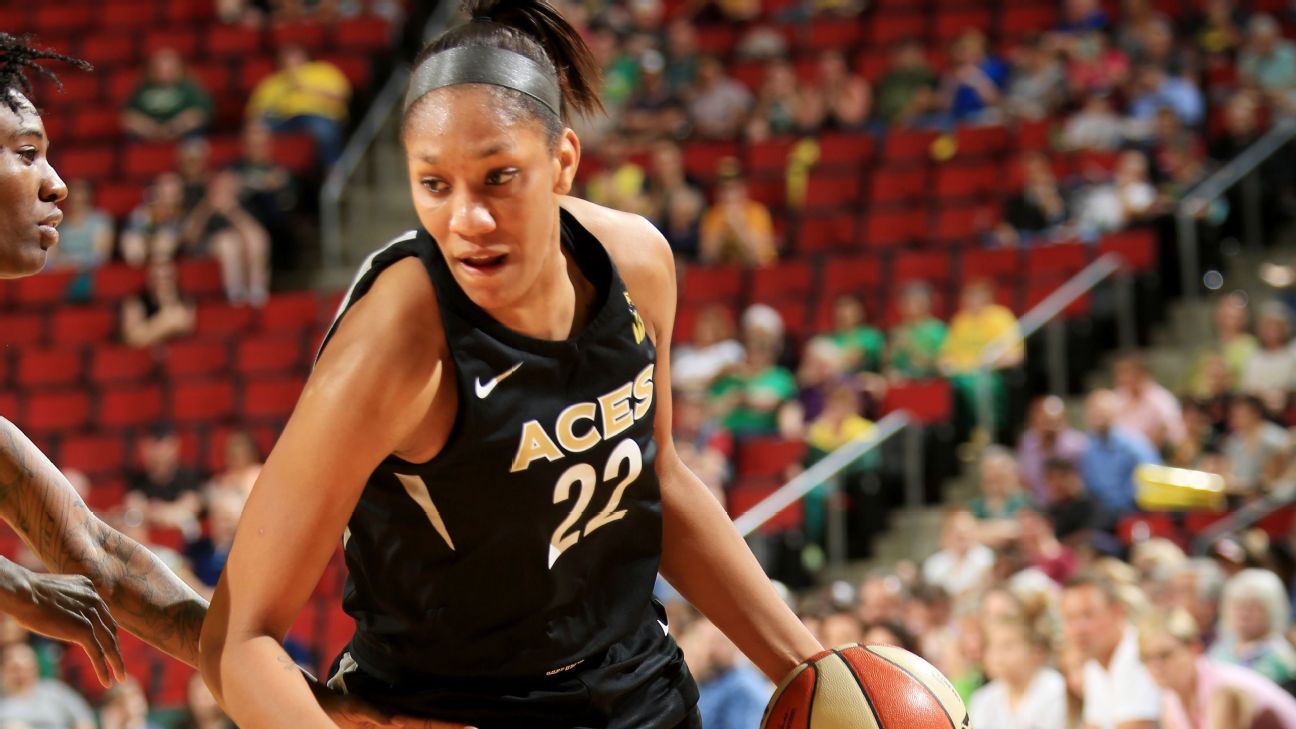 A'ja Wilson was the consensus national college player of the year, the undisputed No. 1 pick in the WNBA draft by Las Vegas and has established herself as the top contender for rookie of the year.

Indiana's Kelsey Mitchell is also in the mix for the award. But Wilson, whose Aces host New York on Thursday (ESPN2, 10 p.m. ET), is leading the way. She's averaging 20.8 points, 8.2 rebounds and 2.2 assists for Las Vegas, and she already has had a game of 35 points and 13 rebounds (June 12 versus Indiana). On Tuesday, she had 25 points, 16 rebounds and six assists in a victory at Seattle.

If Wilson keeps this up, how will the 6-foot-4 post player rank against some of the best WNBA rookie seasons in history? Very well. Admittedly, "best" is a subjective term. After all, nothing is better than winning the Rookie of the Year award and a WNBA title in the same year? Only Minnesota's Maya Moore (2011) and Detroit's Cheryl Ford (2003) can claim that.

But for this top five, we looked at individual stat lines for rookies who particularly stood out, just as Wilson's numbers do now. Four of the five players are still going strong in the league this season.

After leading her hometown school, LSU, to new heights with three consecutive Final Four appearances, Augustus went as the No. 1 pick to a Lynx team desperate for star power. Minnesota had traded Katie Smith during the previous season, and Augustus stepped into the void. The 6-foot guard had the highest scoring average of any Rookie of the Year winner to date: 21.9 points per game. She also averaged 3.8 rebounds and 1.5 assists, while shooting 45.6 percent from the field. As a rookie, Augustus led the league in two-point field goals made (253) and attempted (535) and was the only Lynx player that season to average in double figures in scoring. She was the foundation to what would become the Lynx dynasty and was WNBA Finals MVP in 2011 when Minnesota won the first of its four titles.

Nine players who were not drafted No. 1 have won the WNBA's Rookie of the Year award, but Delle Donne is the only No. 2 selection to earn the honor. The 6-5 forward/guard was taken by Chicago after Phoenix opted for center Brittney Griner, and both have been tremendous. Delle Donne's rookie season, though, was one of the best, as she averaged 18.1 points, 5.6 rebounds, 1.8 assists and 1.8 blocks. Delle Donne shot a little better from behind the arc (43.8 percent, 42 of 96) than she did overall from the field (42.6 percent) as a rookie. She also established her consistency at the free throw line (92.9 percent); now in her sixth season, she is a career 93.8 percent shooter from the stripe.

After four consecutive NCAA titles at UConn, what came next for the 6-4 post player? Winning the Rookie of the Year award, of course, during a season in which she also helped the United States win an Olympic gold medal. Another former No. 1 pick for Seattle, Sue Bird, assessed Stewart's game as being "pro-ready" before she even played her first WNBA game, and that proved true on both ends of the court. Stewart averaged 18.3 points, 9.3 rebounds, 3.4 assists, 1.2 steals and 1.8 blocks her first season with the Storm, establishing that she would be a force just as she was with the Huskies.

Catchings was the No. 3 pick by Indiana -- behind Lauren Jackson and Kelly Miller -- in the 2001 WNBA draft when she was recovering from an ACL injury that had cut short her senior season at Tennessee. Catchings couldn't play in the WNBA in 2001, but it was the best decision by the Fever to wait for her. They got a Hall of Fame career from a 6-1 forward who became the standard-setter on defense, effort and leadership -- plus Catchings significantly improved her shooting ability. She averaged 18.6 points, 8.6 rebounds, 3.7 assists, 2.9 steals and 1.3 blocks as a rookie. Catchings is the only rookie to lead the league for the season in player efficiency rating (PER) at 30.87, and she also led in win shares (9.19) that year.

The Sparks' No. 1 draft selection went straight from leading Tennessee to a second consecutive NCAA title to being the only player who has won both the MVP and Rookie of the Year awards in the same season. (She also helped the United States win Olympic gold that year.) Parker, a 6-4 center/forward, had a phenomenal first year in Los Angeles, averaging 18.5 points, 9.5 rebounds, 3.4 assists and 1.2 steals while shooting 52.3 percent from the field -- and dunking a couple of times. She also led the WNBA in win shares (7.70) that season as the Sparks made the Western Conference finals. They were seconds away from advancing to the WNBA Finals, but a memorable shot by San Antonio's Sophia Young extended the series, and then the Stars prevailed. Parker wouldn't get a chance at the WNBA Finals until eight years later, but she won a title then in 2016 -- the ultimate fulfillment of the amazing promise of her rookie season.
Report a correction or typo
Related topics:
sportsespnwnbaseimone augustusbreanna stewartseattle stormlas vegas acesespnwcandace parkertamika catchingsaja wilsonlos angeles sparksminnesota lynxelena delle donnenews au espnw
Copyright © 2022 ESPN Internet Ventures. All rights reserved.
TOP STORIES
Suspect charged with murder of Brianna Kupfer, LA County DA announces
3 Canadians shot, 1 fatally, at ​resort near Mexico's Playa del Carmen
Laundrie claimed responsibility for Petito's death in notebook: FBI
Kobe Bryant's widow discloses witness list for trial over crash photos
Boy, 14, dies after being shot in head in Pasadena; suspect arrested
Louie Anderson, Emmy-winning comedian, dies at 68
Conjoined twins separated after 10-hour surgery
Show More
Kamala Harris to discuss wildfire recovery efforts during SoCal visit
3 men accused of attacking father and son outside of Toluca Lake pub
High wind warning issued for parts of SoCal as strong winds move in
Lawsuit accuses Mater Dei athletics coach of raping student in 1980s
Proposal could make rooftop solar panels in CA more expensive
More TOP STORIES News