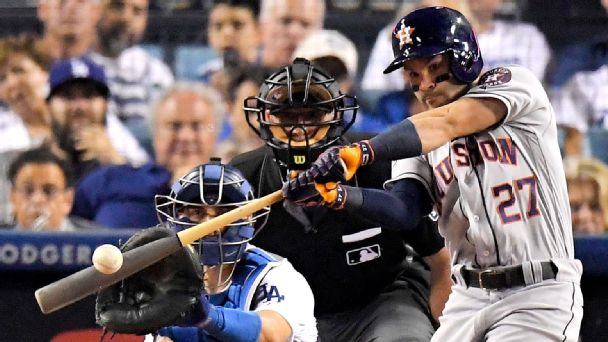 Nobody will hit .400 in the majors this year.

That's true of most of baseball's outlandish achievements. Most likely, no starting pitcher will have a perfect record, no reliever will throw a scoreless season, and no batter will win the Triple Crown or hit 73 (or even 61) home runs. But they might. They might. I'm becoming increasingly convinced that .400 has become an unbreakable threshold, that it will never happen again, that even the .400 chase is extinct, that .400 has quietly moved from baseball's living history to a relic of its distant past.

Let's build the perfect baseball player out of perfect parts. A batting average is made up of hits divided by official at-bats, which puts three skills into one equation:

The perfect .400 challenger, then, wouldn't strike out much, would homer a lot and would have a high batting average on balls in play. He would combine the very best skills of:

Andrelton Simmons, who over the past three years has struck out less frequently than any other batter with at least 1,500 total plate appearances. Excluding those plate appearances when he was walked or hit by pitches (which aren't considered "at-bats," and which pre-empt the chance of any other outcome), Simmons strikes out only 9 percent of the time.

Chris Davis, who -- when he doesn't walk, get hit by a pitch or strike out -- homers on 11 percent of baseballs he makes contact with. That's the highest in baseball over the past three years, among our qualifiers.

So you want to start the at-bat with the contact skills of Simmons; when you hit the ball, you want to have the power of Davis; but if the ball fails to clear the wall you want the batted-ball skills of LeMahieu (in Coors Field, which is BABIP growth hormone). You'll note that these are three very different players, and each hitter's singular skill comes against very poor performances in the others. Out of 119 qualifying batters:

In other words, it looks (as you'd intuit) as if these skills are not complementary, and that pursuing excellence in one category comes at a cost in another. The hitter we're going to imagine is not just the best at three disparate skills -- like asking one pitcher to have the best fastball, the best changeup and the best breaking ball -- but he has somehow broken the resistance bands that prevent one person from excelling at all three simultaneously. That's how unlikely this hitter is.

But we can do whatever we want for this hypothetical, and we're declaring he exists. We're willing him into existence. Contact like Simmons, power like Davis, BABIP like LeMahieu. We can run these numbers easily enough: What would that guy hit?

Now, it obviously is possible to hit .400. Part-time Red Sox catcher Christian Vazquez hit .421 over a 10-game stretch last summer, and if he could do it for 10 games, he could theoretically do it for 162 (or the 120-ish he'd need to qualify for the batting title and make it official). And if Vazquez could theoretically do it, then a couple hundred other hitters could definitely theoretically do it. But to do it, Vazquez (or any other hitter) would have to do one of three things: make more contact than the best contact hitter, homer more frequently on contact than the best power hitter or convert more batted balls into hits than the best BABIP hitter -- while approximating the best hitters in the other categories.

The end of that period is when specialized relievers started to gain prestige, when pitchers began pitching for swinging strikes and when the decades-long rise of strikeouts really took off. While some of those strikeouts can be blamed on hitters -- "everybody just swings for the fences," you say -- it's almost certainly impossible for any hitter, no matter how much he changes his approach, to replicate those contact rates of yesteryear. (For example, even with a runner on third and fewer than two outs -- pure contact situations -- nobody approaches even 95 percent contact.) There are no hitters, none, who match 1924's contact rates. Even the guys you think of as contact hitters strike out way more than they homer: Jose Altuve struck out 84 times last year. Joey Votto struck out 83. Simmons struck out 67. It's the pitchers.

So homering more often than you strike out is basically not an option. That leaves our .400 pursuer to put up a BABIP of well over .380, more likely well over .400. Problem with that is nobody in the past 15 years has managed a .400 BABIP, and only four players since World War II have. Nobody has topped .408. Even .390 is daunting: 27 hitters since World War II. The simple path to .400 requires doing (or almost doing) something that only two hitters since 1960 have done, while also doing (or almost doing) something entirely different that only a couple dozen hitters since 1960 have done. And it's made more difficult by the fact that home runs, strikeouts and BABIP contradict one another: Cutting down one's swing to make contact reduces home runs; hitting more home runs (by elevating one's launch angle) leads to lower BABIP, as fly balls in the park have the lowest BABIP of all batted balls; and batting .400 with power would likely cause pitchers to pitch around a batter more, leading to more walks but deeper counts, which typically also mean more strikeouts.

But nobody since 2000 has topped .380 in the first half of the season, which means nobody since 2000 has even given us a credible, sustained threat at .400. Since at least 2009, no batter who qualified for the batting title held a .400 batting average after May 25, according to ESPN Stats & Info:

If we look at how these nine players batted .400 for a month or so, we can see both how a player might hit .400 and why it's almost certainly not going to happen. All but Cano stayed over .400 not by homering as often as they struck out but by producing BABIP marks way over .400. (Holliday's was .474.)

That's not surprising. The sabermetrician Russell Carleton has done research on how quickly different stats stabilize -- when we can say that a stat probably reflected the player's actual performance, rather than luck and noise. BABIP is the last offensive stat to stabilize, which is to say it's one of the flukiest. Strikeouts are the first to stabilize. It's really hard to luck into never striking out.

That means that, if a player is going to make a charge at .400, it almost certainly won't be by overwhelmingly besting the league's highest contact rate. It will be by having a freakishly high BABIP. But the opportunity to strike out comes before the opportunity to see a ground ball roll just past the second baseman's outstretched glove. As strikeouts become a bigger, more certain percentage of all outcomes, BABIP becomes a smaller percentage -- and the weight of a fluky-high BABIP consequently goes down.

In 1986, Stephen Jay Gould wrote a now-famous essay titled "Entropic homogeneity isn't why no one hits .400 any more." Gould argued that, as the talent pool increased, the variation among major leaguers (and their stats) decreased. There would be fewer outlandish outlier performances, no Babe Ruths out-homering entire teams, fewer Triple Crown winners, etc. "As variation shrinks around a constant mean batting average, .400 hitting disappears. It is, I think, as simple as that."

But records (and outlandish achievements) are inextricably linked to the eras they're set in, and in the "wrong" era many records are essentially impossible. Nobody's hitting .400. Nobody has hit over .372 this century. Nobody has topped .360 this decade. Nobody has topped .350 in the past half-decade. It's not because a .400 hitter doesn't exist but because 1,000-strikeout pitchers do exist. It's impossible not to strike out against this decade's pitchers. And it's close to impossible to bat .400 with any significant strikeout total. They're too big a part of the equation to overcome.

The last .400 chase I took at all seriously was in 2004, when Barry Bonds entered May hitting .472. If anybody could hit .400 in the modern game, it was Bonds, who could do anything. He had a slash line of .472/.696/1.132 at the time (a home run every 5.3 at-bats!), and he'd hit exactly .400 over his previous 91 games, going back to the previous June. He'd also hit over .400 in the second half of 2002. He homered roughly as often as he struck out. And he was intentionally walked so frequently he'd register only 400 or so official ABs per season -- a small enough sample to make crazy outlier BABIP things happen. If something was possible -- even just technically possible -- Bonds could do it.

Just six games later, his batting average had dropped by 100 points. Bonds would float between .350 and .375 for the rest of the season, never seriously challenging .400 and landing at .370. Unless the game changes in some dramatic way, that was the last gasp.