Why we should all root for an Astros-Dodgers World Series 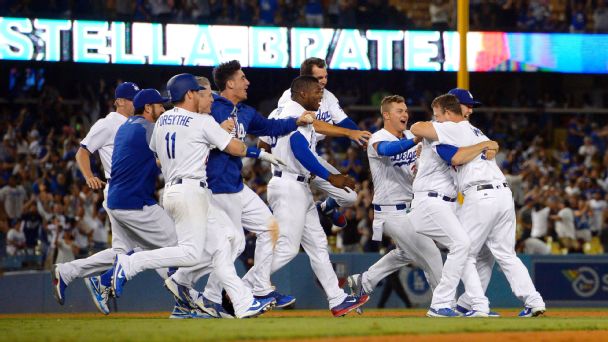 Root for your favorite team. That's your first rooting priority, always. But after that, let me suggest what your next rooting priority might be for the next few months: Root to see the Dodgers' pitchers face the Astros' batters in the World Series.

Those numbers might not mean much to you -- somebody's got to be at the top of a leaderboard -- but they put the Dodgers and Astros on course for a potentially historic World Series matchup. No team in at least the past century has had an OPS+ of 136. (The Murderers' Row-era Yankees managed 127 in 1928.) And only one team in the past century -- the 1926 Philadelphia A's -- has had an ERA+ as high as 136.

OK, maybe my case doesn't come down to one number. To appreciate the Astros and the Dodgers, there are a lot of numbers that are useful. Like:

Those are the OPS+ leaders among all qualified major leaguers. If Aaron Judge knocks off a 1-for-16 stretch, the Astros might arguably have the four best hitters in baseball this year. (At least until Mike Trout reaches our minimum-playing-time threshold.)

Marwin Gonzalez, whom you'll recall from that list right up there that I was just freaking out about, has most often batted seventh in this lineup. (As recently as three weeks ago, he started a game in the eighth spot.) By OPS+, Marwin Gonzalez, the Astros' fourth-best hitter, is having a better season at the plate than Vladimir Guerrero ever had. Better than Cal Ripken, Paul Molitor or Orlando Cepeda ever had.

The Astros, unsurprisingly, have hit better in the No. 7 spot than any other team, thanks in part to Gonzalez. But here's how they've hit in every other spot of the order, relative to the rest of the American League:

The Astros can field an entire lineup of players who have batted at least 200 times this year and have an OPS+ of 119 or higher. Andre Dawson retired with an OPS+ of 119.

Their No. 9 hitter Sunday, Jake Marisnick, has a better OPS than 19 teams' cleanup spots this year. Better than 21 teams' No. 3 hitters.

Indeed, the Astros' 136 OPS+ -- which includes every sub, every pitcher batting in interleague play, every player who has appeared for Houston this year -- is higher than any hitter on 14 major league teams, including the first-place Red Sox and the first-place Chicago Cubs. The Astros, as a team, would be the 23rd-best hitter in baseball by OPS+, just ahead of Anthony Rizzo and Nelson Cruz. This seems impossible, like something in OPS+ must be distorting things somehow, so let's check some other, more precise all-in-one offensive metrics:

The Astros lead the American League in singles, in doubles and in home runs. They lead in infield hits and extra-base hits.

You can't throw the Astros strikes. They hit .403/.409/.745 on the first pitch of at-bats, the best in baseball by a lot. (League average is .346/.353/.589.) But if they miss the first pitch and you get ahead 0-1 -- welp, they're still the best in baseball by a lot, with an OPS after 0-1 more than 50 points higher than the next team. And if they miss that pitch, they're still the best team in baseball. The only way to turn the Astros into an "ordinary" offense is to fall behind in the count against them, which, of course, is a stupid idea that makes no sense.

The Astros can hit.

And the Dodgers can pitch.

There's a stat called fielding independent pitching, or FIP. The premise of FIP is that a pitcher has the most control over strikeouts, walks and home runs, and the least control over what happens to batted balls that are put in play, which can be heavily influenced by dumb luck or by the defenders behind him. So FIP assesses pitchers based on those three measures:

They, uh, also have allowed the lowest batting average on balls in play.

By a stat called sOPS -- which compares a staff's OPS allowed in a split to the rest of the league's performance in that split -- the Dodgers have the eighth-best bullpen of the 2000s. They have the second-best starting rotation of the 2000s. And they've accomplished the latter almost entirely without Yu Darvish, who joined the rotation last week.

The acquisition of Darvish is really the key to understanding how good this Dodgers roster is, from two different directions:

1. The Dodgers are so good that Darvish's value to them will probably come down to one, maybe two runs not allowed. Follow me: The Dodgers are 13 games ahead of the next-best team in the National League; the rest of the regular season is for the record books and nothing more. Once they get to the postseason, they have Clayton Kershaw, Alex Wood and Rich Hill in their playoff rotation. Kershaw is the best starting pitcher in the world; Wood has been one of the five best this year; Hill, on a per-inning basis, has been one of the five best over the past three years. There is practically no improving on their top three starters, assuming all remain healthy.

Darvish, though, slots in as an upgrade over whichever fourth starter the Dodgers would have used -- Brandon McCarthy, Hyun-Jin Ryu or Kenta Maeda. How much of an upgrade? All three have been quite good this year:


The Dodgers now have seven starters on the roster who have made at least 15 starts and have an adjusted ERA better than the league average. Seven! The Giants and the White Sox have none, and 22 teams have two or fewer. Assuming McCarthy, Maeda and Ryu -- who threw seven shutout innings Sunday, allowing a single baserunner -- are shelved for the postseason, the Dodgers might (arguably) have better starting pitchers on the bench than the Cubs will have in their rotation:

Now, Darvish has faced tougher competition and pitched in a tougher ballpark than McCarthy, Ryu and Maeda have, and Darvish is better than those three, but the difference between him and the three very good major league starters he'll supplant is maybe half a run every nine innings. If the Dodgers go to the World Series and Darvish makes four postseason starts and throws 20 or 25 innings, he'd be expected to save a run, maybe two runs compared to any of them. Then he'll be a free agent.

And despite this set of facts, the trade made perfect sense because the Dodgers are so deep that ...

2. There was really nowhere else worth looking to upgrade, and adding Darvish as a luxury item gives them insurance (against Kershaw's back and Hill's blisters) and makes it easier to resist the temptation to force Kershaw to go on short rest. It also gives the team a jolt, and when you're as good as the Dodgers, you might as well get that extra run, because it'd be a shame to have this roster miss out on the World Series by a run, whenever it were to come. What else were they going to do, add a reliever? They already have three relievers with ERAs below 2. Brandon Morrow and Kenley Jansen have the two best FIPs among all relievers this year, and two of the best of all time (min. 20 innings).

The Dodgers' staff is the best in the National League against right-handed batters and the second-best against left-handers. With runners in scoring position, batters have hit .215/.293/.338 against the Dodgers, the third-weakest line since 2000. (With the bases empty, the Dodgers are still in the top 20 this century.) They've had the lowest ERA in the majors in every month this season except June, when they were second. And besides this deep and star-laden pitching staff, they have the best defense in baseball, according to the advanced metric defensive runs saved, and their catchers have been the game's best pitch-framers, according to Baseball Prospectus. Only two NL teams have allowed fewer stolen bases, and only two have caught more runners.

The Astros' offense against the Dodgers' defense is basically just an All-Star game. It's an All-Star game that counts, really counts, and that goes for seven games and will not let up no matter how out of adrenaline you are by Game 4. You don't have to like either of these teams to see the value in that. I'd suggest you get to rooting.