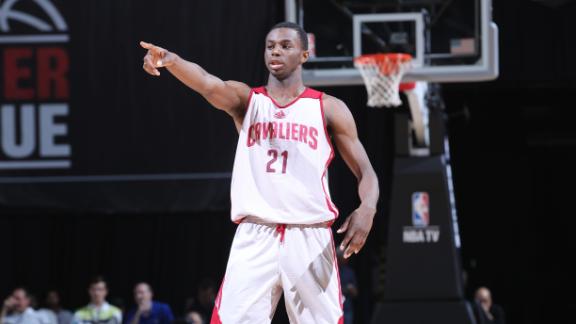 Top overall NBA draft pick Andrew Wiggins told ESPN on Sunday that he just wants to play in a place where he's wanted when he was asked about the uncertainty over his future.

Wiggins' name is at the center of trade talks that would send him to the Minnesota Timberwolves as part of a package that would net the Cleveland Cavaliers All-Star forward Kevin Love in return.

"I just want to play for a team that wants me. So whichever team wants me I'll play for," he told ESPN's "SportsCenter," from Tarrytown, New York, where he was taking part in a photo shoot for Panini trading cards.

Cleveland signed Wiggins to a four-year deal on July 24, but because of league rules on rookie deals, the Cavs are not able to trade him for at least 30 days.

Timberwolves owner Glen Taylor has told the St. Paul Pioneer Press that a trade of Love is "likely" by Aug. 23 or Aug. 24. The first day Wiggins is eligible to be traded is Aug. 23.

"At the end of the day you have to remember that the NBA is a business before anything. I'm a rookie. I really don't have too much say," he said.

ESPN.com's Marc Stein and Brian Windhorst reported last week that a trade sending Love to the Cavaliers for Wiggins, 2013 No. 1 overall pick Anthony Bennett and a future first-round pick is widely regarded around the league as a "when" not "if" transaction, with sources saying the Wolves and Cavaliers continue to discuss the prospect of bringing a third team such as Philadelphia into the trade.

Wiggins: I Want To Play For Team That Wants Me
Cavaliers G Andrew Wiggins discusses his experience at the NBA Summer League and the speculation of being traded for Kevin Love.