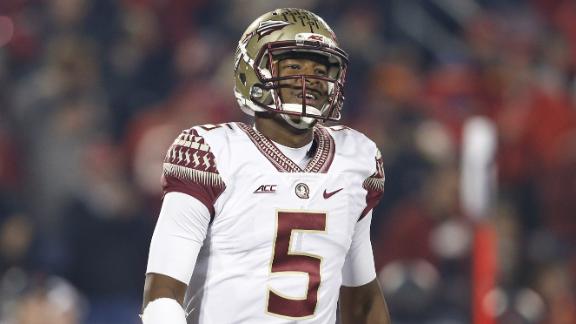 Winston met with compliance officers a month ago to examine memorabilia such as jerseys and photos that were being sold online with his signature. Sources told the newspaper on Tuesday that Winston identified several signatures pictured on the James Spence Authentication (JSA) website as forgeries and pointed out items with his signature that he said he knew he had not signed.

ESPN reported last month that James Spence Authentication had more than 1,000 items that it was marketing as being signed by Winston. On Tuesday, ESPN's "Outside the Lines" reported that the autograph authentication company received the items after another firm rejected them because of concerns about their legitimacy.

Five sources who spoke to "Outside the Lines" on the condition of anonymity said that James Spence Authentication got the items after competitor PSA/DNA backed out of the February signing with Winston because PSA/DNA was told that it couldn't witness the quarterback signing the items in person.

After being shown a signature of Winston's known to be authentic, two independent autograph analysts told "Outside the Lines" that they wouldn't be able to vouch for the authenticity of the JSA autographs that sources said came from a single memorabilia dealer.

James Spence reiterated this week that he had full confidence that the Winston autographs were authentic.

Florida State coach Jimbo Fisher said last month that Winston told him he had not accepted any money for autographs.

Information from ESPN.com's Darren Rovell was used in this report.