With Johansen out, Predators relying even more on Forsberg's hot hand to get past the Ducks 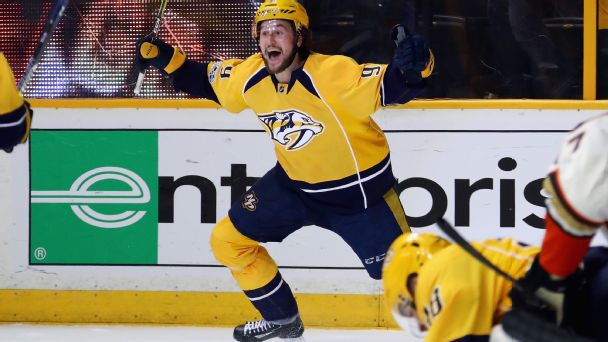 ANAHEIM, Calif. -- The Nashville Predators have become expert finishers, undaunted by deficits or dwindling time on the clock. Through it all, left winger Filip Forsberg has set the table.

The Preds lead the Anaheim Ducks 3-2 in the Western Conference finals, a series in which Forsberg had scored a goal in each of the first four games. In Game 5, his bid for the winner generated a rebound for right winger Pontus Aberg, who lit the lamp to put Nashville one win away from its first Stanley Cup finals appearance. Game 6 goes Monday night in Nashville.

"In my opinion, you can put [Forsberg] in the category of maybe two other guys, top three guys in terms of his skill and what he can do with the puck every night," Nashville defenseman P.K. Subban said.

Nashville trailed 1-0 in each of its three wins in the series. Forsberg has scored two third-period goals, equalizers in Games 3 and 4, and he added the primary assist on the potentially series-swinging, final-frame goal in Game 5.

"That hasn't surprised anyone," Subban said. "But the way he's played away from the puck, his commitment to doing the little things, getting pucks in, getting pucks out and his ability to elevate his game when we've seen our team go through adversity -- whether it's guys are down or whether we're battling back into a game and we need a big goal -- he always finds a way to be there."

Indeed, Forsberg is capable of providing explosive scoring at key times. In February, he scored back-to-back hat tricks as part of a stretch with 10 goals in five games. And he has been a consistent threat in these playoffs, with a pair of five-game points streaks.

Yet Forsberg, currently sporting hastily sewn stitches across the bridge of his nose from a cut he received at some point during Game 2, has evolved into more than an offensive weapon.

"A couple years ago, he was at 14 or 15 minutes a night," Predators coach Peter Laviolette said. "Now, he's a 19- to 20-minute guy that can play on the power play, the penalty kill, in all situations and be a leader on this team."

Forsberg has been solid defensively and in the possession game. Although he did not get an assist on Colin Wilson's game-tying power-play goal in Game 5, he figured into it in a different way. After getting his stick up on defenseman Josh Manson, Forsberg absorbed a cross-check to the head from a frustrated Manson to draw the penalty that led to Wilson's goal.

The 22-year-old Swede now finds himself at the fore of a group of Predators shouldering additional weight in the absence of leading scorer Ryan Johansen and team captain Mike Fisher.

"Obviously, losing a first-line center is tough, but at the same time, this team is not just about one player," Forsberg said of Johansen.

When asked about the onus to do more in Johansen's absence, Forsberg took the opportunity to praise teammates Aberg and Frederick Gaudreau, who was recalled from the American Hockey League to fill Fisher's spot centering the second line and power-play unit.

"Guys come up who just played a little bit during the regular season, but then in their first playoff game, they look like they've been in the league for 10 years," Forsberg said.

In Game 5, because of Johansen's injury, Forsberg was split up from winger Viktor Arvidsson, the other remaining JoFA Line forward. Forsberg played primarily with Colton Sissons and Aberg, while Arvidsson and James Neal flanked Calle Jarnkrok. Forsberg's line produced Nashville's only 5-on-5 goal of the game.

The team concept in Nashville has been more candor than cant, going beyond locker room platitudes and manifesting itself on the ice. Forsberg has been an initiator and sometimes a closer, but plenty of others have followed his example. In Games 3, 4 and 5, the Preds seized control in the latter half of the third period. A shot on goal was tough to come by for the Ducks, while the Predators managed to score two goals in the waning moments of each game -- rallying to win Game 3, rebounding from down 2-0 to force overtime in Game 4 and breaking a tie with an extra goal for emphasis in Game 5.

Forsberg screamed for the puck fromMattias Ekholmon the Game 5-winning play as he surged ahead of an Anaheim defense who got caught pinching in a push for a go-ahead goal. While the Predators have received contributions from various sources, Forsberg has been their constant threat up front. He also isthe relatively frugal organization's highest-paid forward, with a cap hit of $6 million.

Forsberg exemplifies the outstanding conditioning and ability to create an untenable tempo for opponents that has made Nashville so dangerous late in games.