WNBA 2020 season: Projecting how all 12 teams will finish 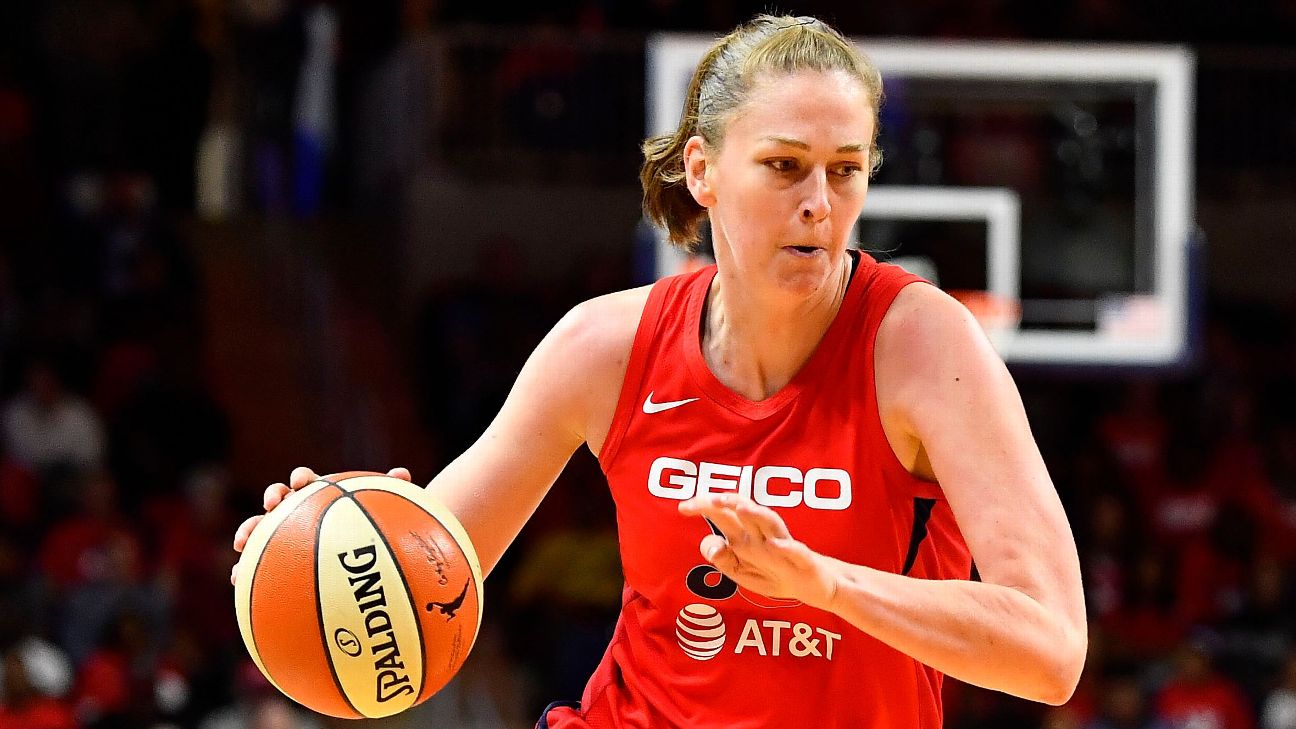 Who's favored to win a WNBA championship unlike any other?

There's no exact precedent for the 2020 season that tips off Saturday (ESPN, noon ET) with a shortened schedule of regular-season games at a neutral site in Bradenton, Florida, because of the coronavirus pandemic. Yet, by using statistical projections, we can get some idea of what to expect from rosters that have been altered by players opting out of participating.

For players who have seen at least 200 minutes of action in the WNBA over the past three seasons, their projected offensive and defensive ratings are based on a weighted average of performance during that span with an adjustment for the typical aging curve.

I then made a subjective projection for each player's minutes played based on current likely rotations.

How well has it worked?

As proof of concept, I looked at retrodicting past seasons using actual minutes played. The projections work relatively well backward, explaining about half of the variation in teams' final net ratings since 2010. Last season, the projections correctly picked seven of the eight playoff teams (missing only on Seattle) and the four teams that reached the WNBA semifinals, with the eventual champion Washington Mystics at the very top.

Still, projecting forward is a more challenging task because we don't know what injuries and trades will shake up rosters between now and the end of the shortened regular season.

With that caveat in mind, let's take a look at the projections. Click here to see the statistical projections of all 12 teams.

It's no surprise that the 2018 champs lead these projections. Not only are legendary point guard Sue Bird and 2018 MVP Breanna Stewart back after missing the Storm's title defense, Seattle managed to keep the entire 12-player roster intact as other opponents suffered key departures. As a result, despite the absence of head coach Dan Hughes due to his higher risk for severe illness if he contracted COVID-19, the Storm project similar to the 2018 title team.

No, this projection does not include 2019 MVP Elena Delle Donne, who is at home after being denied a medical exemption for this season. Still, the Mystics figure to be competitive as long as they can stay healthy with just 10 players on the roster. (Newcomer Tina Charles, another former MVP, was awarded a medical exemption and counts against Washington's salary cap while not participating.)

The Mystics were historically dominant with Delle Donne on the court last season, outscoring opponents by 21.5 points per 100 possessions,according to WNBA Advanced Stats, but still positive (plus-3.7 net rating) without her. And that was with Finals MVP Emma Meesseman, Delle Donne's primary replacement, missing 11 games to play in EuroBasket. Granted, Washington has lost three other starters from last year's title team -- guards Natasha Cloud and Kristi Toliver and center LaToya Sanders. Nonetheless, there are enough quality replacements (newcomer Leilani Mitchell projects nearly as well as Toliver) to step into larger roles.

After the past two champions, there's a big step down in the projections to a group of seven teams separated by just 1.2 projected wins -- which should make for a great playoff race during the 22-game season. The Lynx lead this pack by virtue of a top defense anchored by three-time Defensive Player of the Year Sylvia Fowles. Note that this projection includes 10 games for guard Odyssey Sims, who has yet to report to the team after giving birth this spring. If she doesn't play, Minnesota might fall in the projected standings.

After making the playoffs last season for the first time since 2016, the Sky could be due for some regression to the mean this year. Age is also a bit of a concern with the All-Star backcourt of Courtney Vandersloot and Allie Quigley in their 30s. Still, with a relatively complete roster, Chicago is in good shape for another playoff run -- and possibly one that reaches the semifinals this time.

The Sparks' chances of getting back to the WNBA Finals for the first time since 2017 took a hit when newcomer Toliver and veteran Chiney Ogwumike decided against participating this season. That compromised L.A.'s depth, though the Sparks can still throw out a strong starting five anchored by the frontcourt duo of Nneka Ogwumike and Candace Parker and All-Star guard Chelsea Gray.

These projections aren't buying in on the offseason hype that followed the Mercury's addition of All-Star point guard Skylar Diggins-Smith to the team's core of Brittney Griner and Diana Taurasi. Phoenix's wheeling and dealing cost veterans DeWanna Bonner and Leilani Mitchell, making it something of a lateral move. More important for the Mercury is improving a defense that ranked seventh in the WNBA last season, and losing veteran Jessica Breland to a medical exemption is discouraging on that front.

Even without Liz Cambage as a dominant force in the paint, coach Bill Laimbeer figures to turn the Aces into a top defensive team. The question is how efficient Las Vegas can be offensively without Cambage and Kelsey Plum, who suffered an Achilles rupture in June. Adding Angel McCoughtry, more of a volume scorer even in her prime, might not help the Aces there as much as they hope.


After three long years in the lottery, the Fever could return to the playoffs behind a young frontcourt of second-year center Teaira McCowan -- a dominant force in the second half of her rookie season -- and No. 3 overall pick Lauren Cox. Indiana still has some questions on the perimeter, but this system likely underrates international veteran Julie Allemand, who doesn't have a projection as a WNBA newcomer.

Even with the WNBA schedule shortened from 34 games to 22, these projections like Dallas to beat last year's total of 10 wins. The addition of point guard Moriah Jefferson, who missed last season due to injury, should help move Arike Ogunbowale to a more efficient role. Add in top-five picks Satou Sabally and Bella Alarie, and the Wings figure to improve dramatically from last season's 11th-ranked offense.

Could the Sun really fall from coming within a win of the championship to out of the playoffs? The decision by star center Jonquel Jones to sit out the season makes that a possibility. In contrast to the Mystics, the Sun were outscored by a whopping 12.4 points per 100 possessions with their star on the bench in 2019, and the drop-off from Jones to backups Brionna Jones and Theresa Plaisance looks enormous on paper.

The Dream's chances of bouncing back from a league-worst 8-26 record last season look remote without veteran guards Renee Montgomery and Tiffany Hayes, both of whom opted out of playing the 2020 season.

Though No. 1 overall pick Sabrina Ionescu figures to be a strong contributor from day one -- her college-based projection ranks her among the top 20 players in the league -- the Liberty are more focused on development than winning games this season with an incredible seven rookies on the roster. No WNBA team since 2000 has given more than 40% of its minutes to rookies, a figure New York should shatter. I'm projecting 57% of their minutes played by rookies.
Report a correction or typo
Related topics:
sportsespnchicago skywnbanew york libertydallas wingsseattle stormlas vegas acesatlanta dreamindiana feverconnecticut sunespnwminnesota lynxlos angeles sparksphoenix mercurydailywashington mystics
Copyright © 2020 ESPN Internet Ventures. All rights reserved.
More Videos
From CNN Newsource affiliates
TOP STORIES