WNBA 2022 opening night: Biggest surprises and takeaways as the season tips off 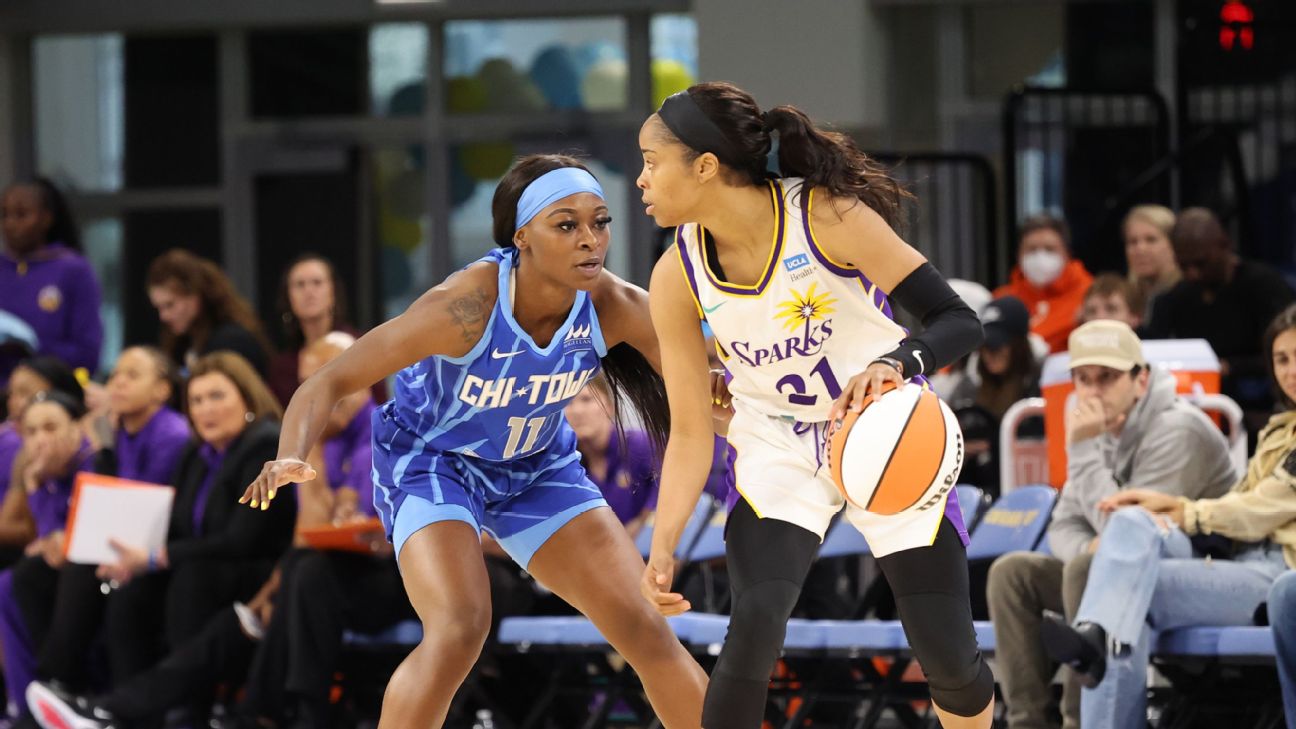 In the first, the Washington Mystics notched a 14-point win over the Indiana Fever. Then, the 2021 defending champions Chicago Sky fell 98-91 in overtime to the Los Angeles Sparksafter acontroversial foul call with 1.5 seconds left in regulation helped force overtime.


Later in the night, the Las Vegas Aces cracked triple digits, defeating the Phoenix Mercury -- opening their season without Brittney Griner, who has been detained in Russia since February -- 106-88. And the Seattle Storm christened their new home court at Climate Pledge Arena in style, with a 23-point win against the Minnesota Lynx.

ESPN's Mechelle Voepel, Alexa Philippou and Kevin Pelton analyze each of the four games to open the season.

How Chicago lost to Los Angeles

It's necessary to start with a caveat here: Like most WNBA teams right now, neither squad was at full strength. The Sky were without Allie Quigley (knee) and 2021 Finals MVP Kahleah Copper (overseas). The Sparks were without Kristi Toliver (coaching in the NBA playoffs) and Katie Lou Samuelson (overseas). So it's too soon to entirely overreact one way or another about either team.

That said, this was a nice win for the Sparks, who are looking to bounce back from a disappointing 2021 in which they missed the postseason for the first time in a decade. What may have been most surprising or notable about the performance was that it wasn't the likes of prized free agency additions Liz Cambage and Chennedy Carter who moved the needle to beat the reigning champs. Cambage got in early foul trouble and didn't score from the field until the second half, finishing with 12 points and four rebounds. Carter was limited to 12 minutes, although she was productive in that time with 12 points.

Nneka Ogwumike (19 points, seven rebounds, three steals, two assists) dominated the first half -- great news for L.A. after she dealt with a knee injury last season -- while Jordin Canada, who won two titles with Seattle before signing with the Sparks this past offseason, carried the team across the finish line with a team-high 21 points and eight assists. Lexie Brown's clutch shooting (4-for-5 on 3s) kept the momentum from entirely shifting in Chicago's favor.Chiney Ogwumike played 19 minutes and had some nice moments, and Brittney Sykes, who said she worked in the offseason on bringing back her offensive swagger, was also a difference-maker at times on both ends. Overall, that sort of depth will serve the Sparks well, especially if better luck with health is on their side this year.

It certainly didn't look like a finished product, and I'm curious to see how Derek Fisher continues to tinker with lineups, especially once Toliver and Samuelson are back. Another storyline to watch will be how quickly Cambage (who finished -3, the second worst mark on the team) can find her footing, and how the Sparks can put her, and the Ogwumikes around her, in the best position to succeed.

Chicago did a lot of things that put itself in position to win the game, and barring a controversial foul call with 1.5 seconds to play, would have come away with the W. Afterwards, players and James Wade said they thought they were just gassed in overtime, which contributed to their turnover problem (25 vs. L.A.'s 22 on the game). Emma Meesseman stuffed the stat sheet with 12 points, five assists and eight rebounds, but it was obvious she's still getting used to her new teammates and system. Her continued comfort will certainly be something to watch, including as Copper and Quigley re-insert themselves into the lineup, too.

And how about Dana Evans? I did not have her scoring a career-high (and team-best) 24 points on my bingo card, but hey, that's why you play the game. -- Alexa Philippou

Seattle's depth came through against Minnesota

SEATTLE -- On a historic night where the Storm returned to the Seattle Center campus for the first time since 2018, making their regular-season debut at newly rebuilt Climate Pledge Arena, the reigning Commissioner's Cup champions delivered a performance worthy of their modern new home. Seattle outscored the visiting Minnesota Lynx 34-14 in the third quarter, turning a tie game at halftime into a 97-74 rout.

Like the building, the Storm's supporting cast underwent a makeover after the team was eliminated in the second round of the playoffs without injured star Breanna Stewart last season. Seattle traded for starting small forward Gabby Williams and added veterans Briann January and Jantel Lavender to the bench, hoping to reduce the team's dependence on its three All-Stars (Stewart, Sue Bird and Jewell Loyd).

On the eve of the opener, Bird argued the additions made the Storm the deepest team in the league. The second unit looked the part Friday, carrying Seattle through a poor-shooting first half for Stewart (2-of-10). With all three stars on the bench, the Storm rallied to tie the game in the second quarter.

By contrast, Minnesota's depth was compromised by the absence of four key players: Napheesa Collier (pregnant), Damiris Dantas (working back from a Lisfranc injury), Kayla McBride (still playing abroad in Turkey) and Angel McCoughtry (who underwent a PRP injection earlier in the week). The Lynx had just nine players in uniform, one of whom, Serbian rookie Nikolina Milic, had never practiced with the team before making her WNBA debut on a hardship contract.


The absences left Minnesota heavily dependent on the duo of Sylvia Fowles and Aerial Powers, who were up to the task in the first half. Powers had 14 and Fowles 12 to account for 63% of the team's scoring. Yet Seattle was able to contain them after halftime, and the game flipped in a hurry. The Lynx had more turnovers (seven) than field goals (five) in the third quarter.

Meanwhile, the Storm's stars were making their presence felt at the other end. Loyd and Bird combined for 17 of the team's 34 points in the period and hooked up on a highlight when Bird lobbed the ball from well beyond half court to Loyd, who finished the alley-oop with a layup for a three-point play. The assist was one of nine on the night for Bird, who finished one shy of a double-double in 22 minutes to begin her 19th and likely final WNBA season.

Friday's game was a reminder that as long as Bird, Loyd and Stewart are healthy, the Storm will be tough to beat. If Seattle continues to get the kind of production that the bench offered in the season opener -- three reserves scored at least nine points, with January and Stephanie Talbot combining for six assists and five blocks -- this team is capable of hanging another banner in the rafters of the new arena. -- Kevin Pelton

Aces, absences too much for Phoenix to overcome

On an opening night when the Mercury's thoughts were on Brittney Griner, they also missed their star center on the court.

In a 106-88 loss to visiting Las Vegas that provided the Aces' Becky Hammon with her coaching victory, the Mercury were far from their best defensively without Griner and Brianna Turner, their top rim protectors, plus guards Diamond DeShields and Kia Nurse. DeShields and Turner have been playing overseas but are expected back soon, while Nurse is rehabbing a knee injury suffered during the playoffs last October.

"We have some important players coming in for our next game that I'm sure will help us," said Vanessa Nygaard in her debut as the Mercury's coach. "I have to be better. And we'll all continue to improve."

Guard Skylar Diggins-Smith picked up where she left off last season, leading the Mercury with 25 points. Shey Peddy had 16, and Tina Charleshad15. Diana Taurasi, starting her 18th WNBA season, had nine points and nine assists.

"They shot the hell out of the ball tonight," Diggins-Smith said of the Aces' 58.2% shooting from the field. "We know we've got to get better. We're missing some pieces." The Mercury staff and players wore warm-up T-shirts that read, "We Are BG 42."

U.S. representative Greg Stanton of Arizona, a longtime Mercury fan who was mayor of Phoenix when Griner was drafted in 2013, attended Friday's game. Stanton told ESPN that the decision earlier this week by the U.S. government to classify Griner as "wrongly detained" was an important step in the effort to get her out of Russia.

"That allows for significant additional action by the United States' state department and the special envoy to get much more actively involved," Stanton said. "No one is operating under any false hope here ... this is going to be very difficult negotiations and discussions. I know in Congress, we're going to do everything we can do to help bring Brittney Griner home, and we're going to keep pushing the administration.

"I was lucky to help greet her at the very first press conference when she was introduced as our first pick. It's been a great joy to watch the professional and personal development of Brittney. I've marched with her in a gay pride parade. My wife and she worked together on anti-bullying efforts. I've seen her blossom as a leader in this community. We need to get her home." -- Mechelle Voepel

Rookies showed out for Washington and Indiana

As happy as the Mystics were to have Elena Delle Donne back for Friday's season-opening 84-70 victory over Indiana, they also wanted to see how their draft lottery pick did in her first WNBA game.


Center Shakira Austin, whom the Mystics took with the No. 3 selection in April's draft, didn't have big numbers -- three points, three rebounds and one block -- but showed promise, according to coach Mike Thibault.

"She didn't finish some shots around the basket; I think that's going to come with some time," Thibault said after the game. "She kind of rushed herself a little bit today. But I thought she really defensively bothered them. I think this was a good initial game for her."

Austin began her college career at Maryland but then transferred to Ole Miss, where she averaged 15.2 points and 9.0 rebounds this past season. With Delle Donne not traveling to Minnesota for Sunday's game due to load management, the 6-foot-5 Austin will have a test against veteran star center Sylvia Fowles of Minnesota.

"She played big minutes on defense," Delle Donne said of Austin. "She just makes the game easier for us because she creates more opportunities when she's getting second-chance rebounds. When she's attacking, we're really good.

"Defensively, she's just so long. So even when she's in a ball-screen, she smothers guards. And her ability to get back and recover is also really impressive. And just how much you see her wanting to get better."

Austin wasn't the only lottery pick on the floor on Friday night, though: No. 2 NaLyssa Smith and No. 4 Emily Engstler, both forwards, were also in action for Indiana. Smith, a standout from Baylor, had 13 points and 13 rebounds to start her WNBA career, while Engstler had four and nine, respectively. Center Queen Egbo, the No. 10 pick in the draft, had 10 points and six rebounds for the Fever, who are expected to rely a lot on their young players -- which includes Destanni Henderson and Lexie Hull -- this season.

Guard Crystal Dangerfield, a third-year player, who was the rookie of the year for Minnesota in 2020, was cut by the Lynx this past week, but wasn't out of action for long. The Fever added her to their roster, and she had five points and two assists Friday. -- Voepel 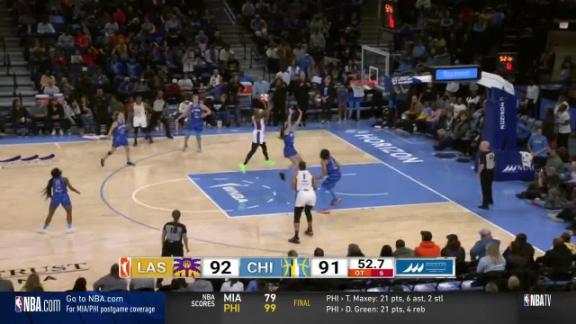 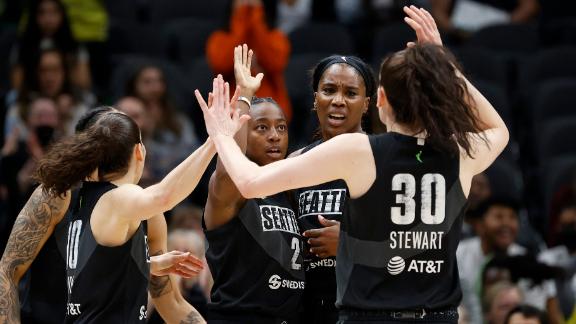 Bird throws full-court lob to Loyd for and-1
Sue Bird sends a full-court pass to Jewell Loyd, who finishes the shot plus the foul. 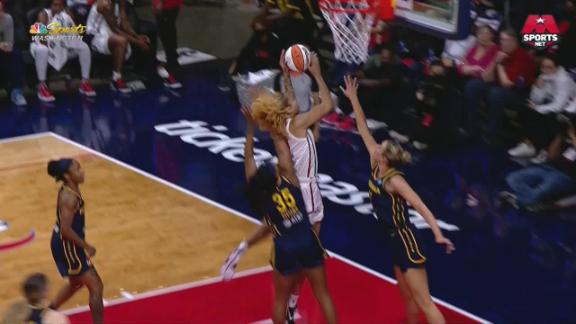 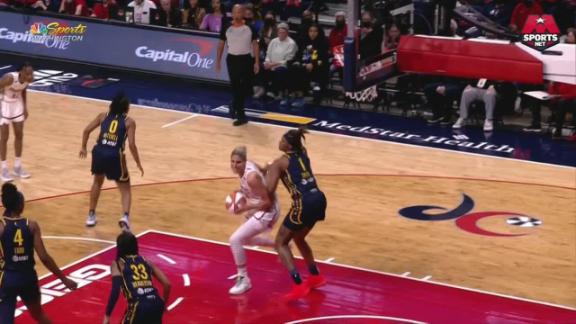 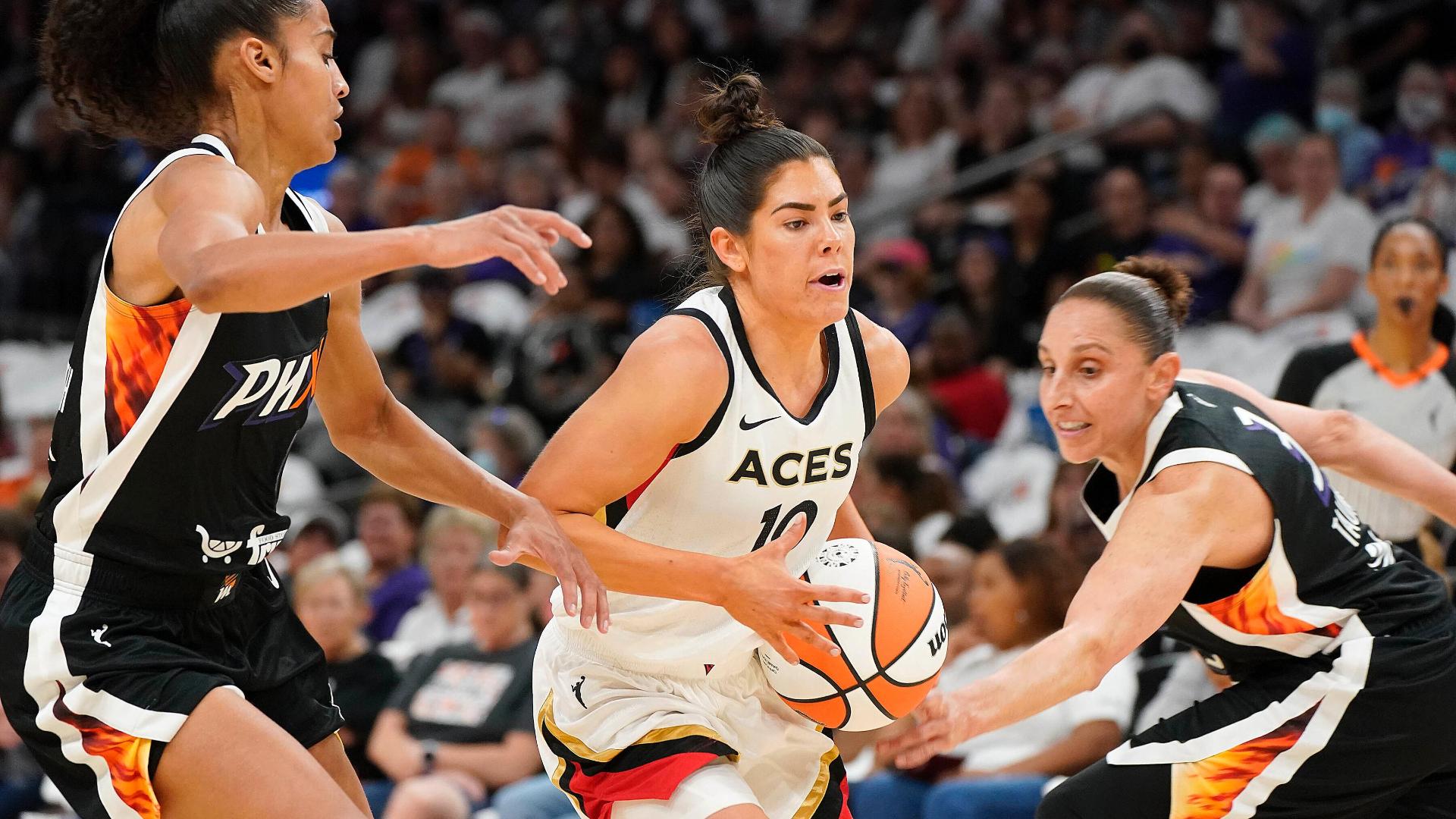 Kelsey Plum speeds to the rack to score
Kelsey Plum blows by the defense to score for the Aces. 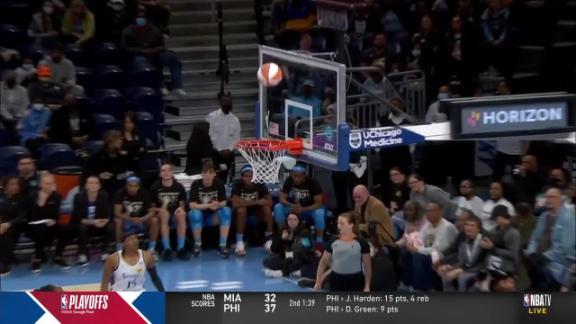 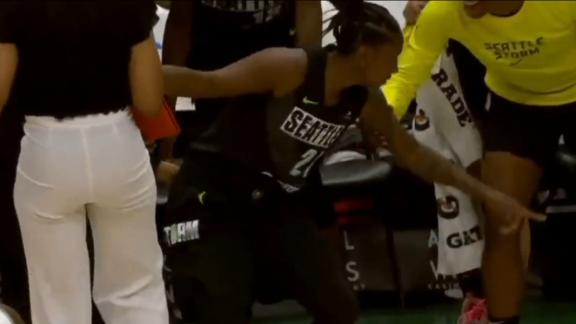