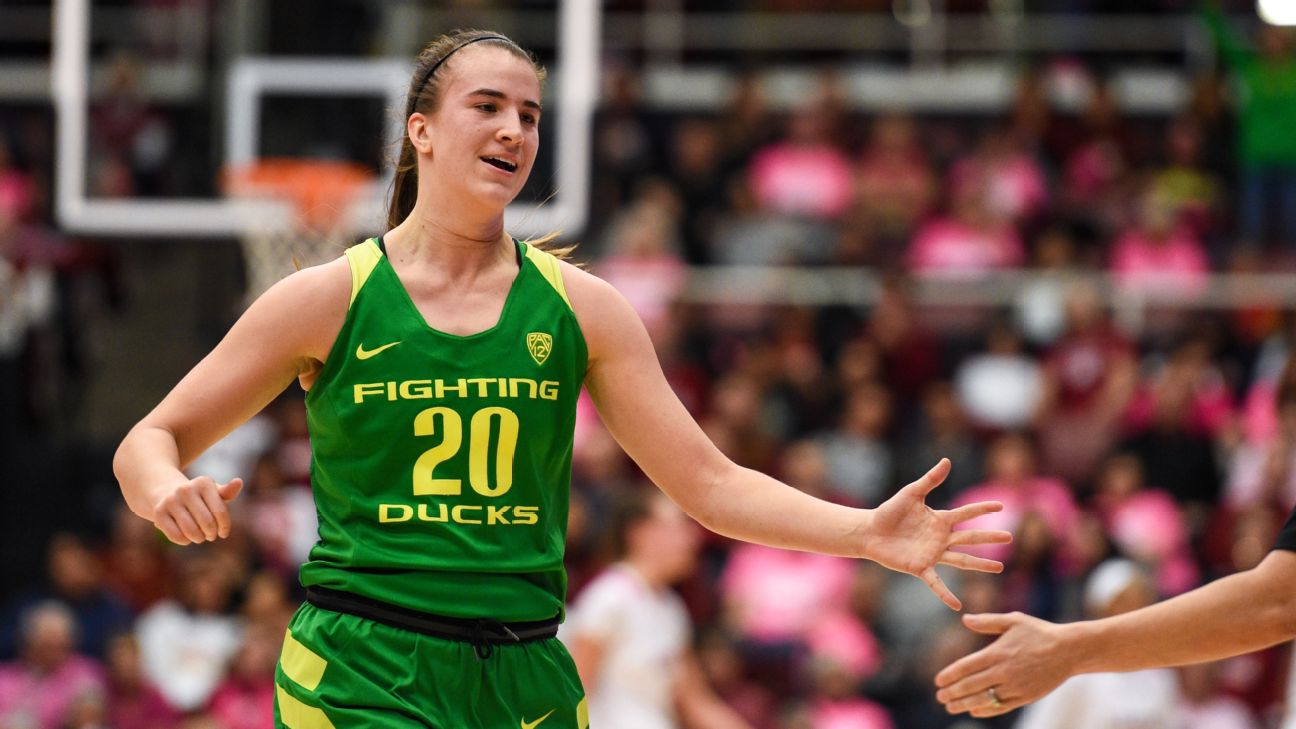 How might the 2019 WNBA draft shape up? Many of the top college seniors -- as well as some draft-eligible juniors -- were on display last weekend as the Power 5 conference tournaments were played.

The first half of Championship Week is complete, but in the WNBA we're still waiting to find out the fate of Australian center Liz Cambage, who wants out of Dallas. An MVP candidate last season, Cambage wants to go to Los Angeles, which has been her preferred WNBA destination all along -- going back to when she was drafted No. 2 overall by the Tulsa Shock, who later moved to Dallas and became the Wings.

But at this point, the situation is in stalemate: The Wings want more than the Sparks are willing to give up. Will Los Angeles figure out a way to boost its offer? Can Cambage be persuaded to go anywhere else? If she won't, is Dallas willing to keep Cambage out of the WNBA this season rather than take less than the Wings feel she is worth in a trade?

It remains to be seen how this situation will affect April's WNBA draft.

One of the biggest changes since our first mock draft in January: Minnesota will be without Maya Moore, who is opting not to play in 2019. The four-time WNBA champion Lynx have holes to fill, with Moore's absence and Lindsay Whalen's retirement.

With all that in mind, here is our second version of the 2019 WNBA mock draft. We're including draft-eligible juniors, as designated by an asterisk, but these players have not officially announced their plans.

The Pac-12 player of the year for the second season in a row, Ionescu led the Ducks to the conference's regular-season title, but Oregon fell in the league tournament final to Stanford. She's averaging 19.6 points, 7.5 rebounds and 8.1 assists. She has struggled with trying to force offense in some games, but she's still a dynamic guard who could facilitate a lot for the Aces.

Durr repeated as ACC player of the year, and the Cardinals tied Notre Dame for the league regular-season title. But injury-plagued Louisville lost big in the ACC final to the Irish. Durr is averaging 21.3 points and shooting 44.3 percent from the field. If what the Liberty most value is a guaranteed scorer, they might see Durr as the best option despite some tempting post players available.

The Bulldogs finally won the SEC tournament for the first time, with McCowan taking tournament MVP honors. She was also named SEC player of the year and is shooting 65.5 percent from the field while averaging a double-double (17.8 PPG, 13.5 RPG). The Fever need a big, and McCowan has had a strong senior year to make herself a lottery pick.

She's averaging a double-double (22.9 PPG, 16.3 RPG) and has been so productive and consistent she has jumped way up our draft board. Anigwe is a high-level athlete whose game should translate right away to the WNBA and help Chicago on both ends of the court.

The Wings are going to need help on all fronts, and if Young makes herself eligible for the draft and is still available, Dallas likely won't pass on the chance to get someone who is elite at just about every skill. She might not get all the headlines for the Irish, but she's their best all-around player. She was MVP of the ACC tournament.

Collier has always been really good, but there's a next-level maturity about her game now. She was the AAC player and defensive player of the year. Coach Geno Auriemma has been happy with how hard Collier plays, and he's as tough a judge as anyone. Collier is also averaging a double-double (20.9, 10.5) and, like Anigwe, has climbed up our board.

We'll see what happens with the Cambage situation, but if Smith is still available at this spot, the Sparks might opt for this Australian post player. Smith is averaging 19.6 PPG and 8.6 RPG and has made 73 3-pointers. The big question with Smith is how much more she is expected to blossom.

Because of the familiarity Mercury coach Sandy Brondello has with the Australian forward, this could be a good match. Magbegor played for Brondello on the Aussie national team. While she's young (19) and still developing, Magbegor's ceiling is considered very high.

She's a high-level scorer (21.0 PPG) and known for her fearlessness in the clutch (Notre Dame won the 2018 national championship in large part because of that) and overall confidence. She'll go higher if teams with earlier picks don't opt to go for the available post players.

Will someone of Brown's size and accomplishments -- she was just named the Big 12 tournament MVP -- fall this low? Maybe not. But Brown (15.7 PPG, 8.0 RPG) isn't as mobile as some teams like, and she can get into foul trouble. That said, she's still 6-7 with solid offensive skills that coach Mike Thibault can use.

Her perimeter shooting ability at her size has always been projected to be Samuelson's calling card at the next level. She's averaging 18.9 PPG and 6.7 RPG and has hit 75 of 201 3-point attempts this season. Back issues kept her out of the AAC tournament.

Will she be a strong enough defender at the next level? How effective will she be when the offense doesn't run entirely through her? She has good hands and is relentless under the basket; she's averaging 28.0 PPG and 13.3 RPG and shooting 69.6 percent from the field. Her 45-point, 10-rebound performance in the Big Ten title game win was fantastic.