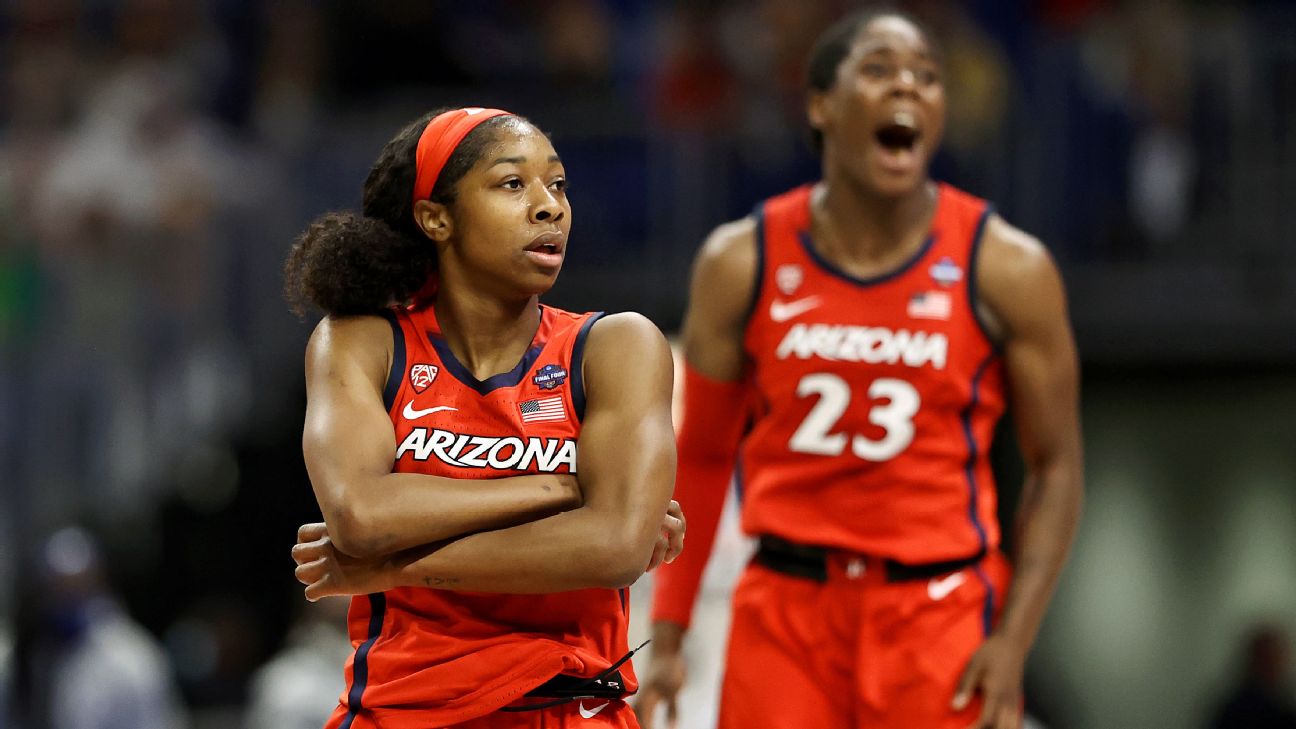 Now that the 2020-21 women's college basketball season is over, we finally know which players will be available for the April 15 WNBA draft. With the NCAA's blanket eligibility waiver due to the coronavirus pandemic, seniors are able to return for another season, and some players who earlier were on our draft board opted to do that. Among the prominent draft-eligible juniors, one of our projected first-round picks -- UConn's Evina Westbrook -- is also remaining in college for 2021-22.

WNBA coaches and general managers use the NCAA tournament for evaluation, and sometimes it can boost a player's stock. Arizona's Aari McDonald, for instance, started at No. 2 in our first mock draft last December, then dropped to No. 8. Her March Madness success has her back in the top five.


There's a little more than a week before the draft, which like last year will be held virtually. And things might change before our final mock, especially if Dallas trades any of its four first-round picks. But here's how the three rounds project a few days after Stanford was crowned national champion. (Note: * denotes draft-eligible junior)

Collier is still the projected No. 1 pick, but let's face it: There are questions about how she fared against teams with strong post players and what that means for her pro future. Collier finished the season averaging 19.0 points and 11.3 rebounds per game, while shooting 51.1% from the field. But in three meetings with Baylor, she averaged 5.7 points and 5.0 rebounds, shooting a combined 5-of-14 (35.7%). She played well in the Sweet 16 upset over No. 2 seed Maryland (16 points, 11 rebounds) but struggled in the Elite Eight vs. South Carolina (four points, four rebounds, 2-of-10 from the field). After that season-ending loss, Texas coach Vic Schaefer still talked up Collier, saying, "Whoever gets her, they are going to get a motor, a work ethic. She's carried us a lot of nights. Obviously, the next level is a lot [more] physical."

Everybody has been wondering just what Dallas will do with all its picks. We've been leaning toward the Wings taking Collier and Kuier, both of whom are 6-foot-5. The consensus continues to be that the 19-year-old Kuier has a very bright future and high ceiling, and as she gets stronger can make an impact in the WNBA. But she will have to adjust to the more physical style in the league. She plays for Ragusa in Italy, averaging 8.9 points, 6.8 rebounds and 1.5 blocked shots, and has made 14 3-pointers this season in EuroLeague play.

She finished with a 30-point game in the Scarlet Knights' upset loss to BYU in the first round of the NCAA tournament. She has been a consistent scorer all season -- and really her entire Rutgers career after spending her freshman year at Texas Tech. She finished this season averaging 21.3 points, 6.0 rebounds and 5.2 assists. Guirantes would give the Dream another scorer who can create her own opportunities and stretch the defense.

Davis is 6-2 and can score from a lot of spots on the floor, plus defend at a pretty high level. The Fever would probably like to see her 3-point shooting improve, but for a team that's still trying to figure out its identity in Marianne Stanley's second season, Davis could provide a multidimensional option with good size. She finished her senior season averaging 17.3 points and 8.8 rebounds, but she shot just 26% from behind the arc.

We'll see if Dallas goes for a point guard with this pick, and if so, will it be McDonald or Louisville's Dana Evans? McDonald was the star of the NCAA tournament, coming so close to winning the championship. She had a terrific career and finished her senior season averaging 20.6 points, 5.6 rebounds and 4.0 assists. Did her performance in San Antonio raise her draft stock? Or did the fact that she shot 5-of-20 in the final against Stanford, the NCAA tournament opponent that knew her best, temper that? She's an exciting player with great speed and a knack for getting to the foul line. She's a relentless defender. Sure, she's small, but her will is mighty, and she plays "hungry," as Arizona coach Adia Barnes said.

Dallas could opt for Evans at No. 5; if not, she might join the Cardinal contingent with the Liberty. Evans went through a shooting slump for much of March, but then she had 29 points in a Sweet 16 victory over Oregon and 24 in an Elite Eight loss to Stanford. She was known for coming through in the clutch in her college career. Former Louisville teammates Asia Durr, Jazmine Jones and Kylee Shook are on New York's roster, although Durr didn't play last season because of COVID-19, which for her has had serious lingering effects. But it means the Liberty have a good gauge on what kind of player they will get from Louisville, because Evans has been one of the school's best.


So here we are, back with another Wings pick if there are no trades. Provided she's still available, Dungee's scoring ability (22.3 PPG as a senior) probably makes her tough to pass up. Dallas already has a premiere scoring guard in Arike Ogunbowale, but Dungee could provide another offensive option who can tax defenses. It also would be interesting to see the impact Dungee would have with better post players around her.

It seems probable the Sky will opt for a point guard who could learn from the great Courtney Vandersloot. Williams was the backbone for national champion Stanford this season, leading the Cardinal in scoring (14.0 PPG), assists (3.1 APG) and minutes played (32.3 MPG). She finished her career with a program-best 311 3-pointers. She struggled shooting during the Final Four (6-of-20 combined vs. South Carolina and Arizona), as it seemed she was pressing, wanting so badly to win a title in her hometown. But she still played all 40 minutes both games, and her overall trajectory this season was up.

Walker seems to have all the skills you would want to see in a forward, including a strong 3-point shooting ability. She averaged 19.1 PPG and 9.4 RPG this season, and she made 78 of 196 attempts from behind the arc (39.8%). After their dynasty years, the Lynx have been restocking through the draft, trades and free agency, and you could see a player like Walker fitting in Minnesota's style of play.

Mack finished this season as the Division I leader in blocked shots (112, 4.0 BPG). That could help the Sparks, who were in the bottom part of the league in that category last season. Mack averaged 19.8 points and 12.4 rebounds as a senior. While she might need to become a little more versatile offensively, she has a lot of physical tools to work with at 6-4 with a long wingspan.

She has moved around in our mock draft: as high as No. 7 and as low as No. 13. The question with Onyenwere remains whether her terrific athleticism makes up for her being a tweener size-wise at 6-foot. She averaged 19.1 points and 7.2 rebounds this season, and she hit 23 3-pointers, so that is a part of her game that can keep improving. The Storm lost Alysha Clark to free agency, and maybe Onyenwere can find a role as an all-purpose defender the way Clark did. If so, she could fill a hole for the defending champions.

Carrington had an impressive final season after transferring from Stanford to Baylor, including leading the Lady Bears in scoring (22 points) in their Elite Eight loss to UConn. She averaged 14.1 points and 4.9 rebounds this season. She is a big, strong guard at 5-11 who doesn't shy away from physical play, which could make her a good fit on Bill Laimbeer's team.