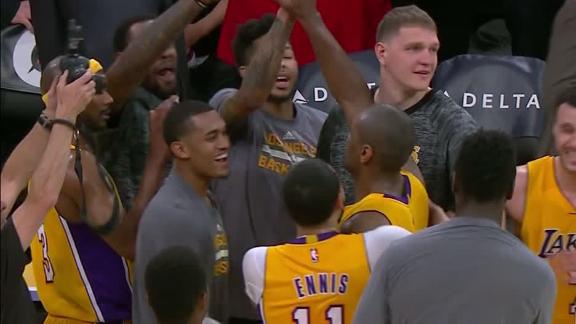 LOS ANGELES -- Prior to what was likely his last home game with the Los Angeles Lakers and his next-to-last game after 17 seasons in the NBA, swingman Metta World Peace sat at his corner locker, tapping out text messages to help arrange a get-together with friends.

"And 50 shots!" added nearby Lakers guard Jordan Clarkson, a nod to Bryant's in his finale.

"Oh my goodness," he said. "Please don't listen to none of that, please."

He's the Lakers' elder statesmen, tasked with providing leadership to a roster packed with fledgling talent even though he watches most of the team's games from the bench.

Tuesday's 108-96 win over New Orleans was an exception, though.

World Peace started, was introduced last in the lineup and received hearty cheers from the crowd every time he touched the ball, urging him to shoot.

The 37-year-old responded with a game-high 18 points, his most all season, all of them in the second half, 11 coming in a thrilling fourth quarter.

He hit 7 of 17 shots, including four 3-pointers, in about 25 minutes, the most he has played all season.

Midway through the fourth quarter, Lakers coach Luke Walton subbed him out, and World Peace received a standing ovation, and fans soon began chanting "Metta!" -- a moment that Walton said gave him goosebumps.

"That was crazy," Clarkson said after.

"I hope my last game in the NBA is just like that," Lakers forward Thomas Robinson added.

Almost exactly one year ago, after Bryant's stunning finale, his teammates doused him in champagne. On Tuesday, World Peace's teammates did something similar, only with ice water.

"His value is the way he conducts himself as a professional," Walton said before the game. "When you have a team full of young men like we do, it's important to put some good role models around them. A lot of these guys, for the first time, are living on their own and living in a city they're not from, so it's important to have some positive vets on the team that can show them how to have longevity on the team, and Metta does that.

"He takes care of his body as well as anybody I've ever seen or played with. He works extremely hard every single day, never complains, always ready to go when called upon and kind of takes a lot of the young guys and talks to them when they need talking to. And it's just been great having him around all season."

But to imagine that World Peace would one day be in this position, let alone play this long in the NBA, is something that Walton can barely comprehend.

"Metta's story is incredible," Walton said. "It really is."

It's one of the most remarkable turnarounds in NBA history -- and considering the life that World Peace once led, even he didn't think he'd make it to this point, to this role.

"I didn't think I would last this long," he said. "I had a rough start, man. A rough start. I wasn't in it. Mentally, I was somewhere else."

He was also somebody else -- Ron Artest, an NBA All-Star and the 2004 NBA Defensive Player of the Year whose promising career was derailed because of his infamous role in the 2004 brawl at the Palace of Auburn Hills.

After that bench-clearing fracas carried into the stands, World Peace was handed a 73-game suspension -- the longest in NBA history -- and was deactivated before the Pacers dealt him to the Kings, who later dealt him to Houston, which, he said, refused to re-sign him as a free agent in 2009.

At that point, World Peace said he was resigned to playing overseas, in Greece, but at 12:01 a.m., when the free agency signing period opened, he said the Lakers called.

He joined them, bringing with him a checkered past and plenty of questions.

"I was a little intrigued on how he was going to be, but he was awesome," said Walton, then a Lakers forward. "From Day 1. He never came in and tried to cause problems. He was always about the team."

For Walton, it was nice just not having to face World Peace anymore.

"I dreaded those days, those matchups," Walton said. "He was just so good with his hands. He would steal the ball all the time without [you] even realizing you didn't have the ball anymore. There were honestly times when I was dribbling and I would go to pass and realize he had taken it from me mid-dribble and gone the other way."

Even with his checkered past, World Peace became a cult hero in 2010 when he hit one of the biggest shots in Lakers history -- a clutch 3-pointer in their Game 7 win over the Boston Celticsin the NBA Finals.

Walton has showed that signature highlight -- World Peace drilling the dagger 3 with a minute left, giving the Lakers a 79-73 lead -- to his players over the past few days, and World Peace reflected on that moment before Tuesday, recalling a key turning point in his life.

The night before Game 7, he was a wreck, so he called his sports psychologist, who flew from Houston to Los Angeles, he recalled.

"We had a long conversation about things that bothered me," World Peace said. "One of the things that bothered me, a good friend of mine over the years on the basketball court, was [Celtics forward] Paul [Pierce]. He used to get in my head because he talked some trash and when somebody talks trash, I immediately forget about basketball and I get techs and ejections. That's something I didn't want to happen that game. I was most worried about that in Game 7, about being ejected."

Technical fouls and ejections became all too commonplace for World Peace earlier in his career, not just in the brawl against the Pistons, but in Game 6 of the 2004 Eastern Conference finals, also against the Pistons. He picked up a flagrant foul 1 with the score tied at 59 and 3:57 left in the fourth. The Pistons took a four-point lead and won by four, another ghost that haunts him.

But he has changed in many ways, especially his diet.

"When I first got here, I thought I'd be retired by 33, 34, because in my midcareer, I partied a lot," he said. "My body wasn't feeling the same. I drunk a lot of alcohol and had a lot of aches and said, 'You know what? There's no way I'm going to last.' And then I decided that season to kind of change my habits, and every year I was getting better and better and better."

He ate Sunday breakfasts with the late Lakers patriarch owner Jerry Buss. He acclimated to the name Metta World Peace, even if he admitted that he first acquired it as a stunt.

He hopes to keep playing, perhaps reach 20 NBA seasons, perhaps win another ring. He doesn't know whether either is possible -- or whether his final NBA game will come Wednesday at Oracle Arena in Oakland.

"I don't want to put nobody on the spot," he said. "For one, it's not my time anymore. I can still contribute, absolutely. But it's another era. It's other people's time. Whether I'm good enough or better than whoever, that's not really important."

He doesn't know what tomorrow brings, aside from the fact that he'd like to coach some day, though he's not looking that far ahead now.

"Really, I won't be able to make any decision until everybody else in the NBA makes their decisions," he said. "I'm the last one on the list."

But if Tuesday was his final Lakers home game, he said he's OK with that.

World Peace loves to joke around, but he can also be deeply reflective, as he was at many points before and after Tuesday's game.

"I kept it realistic."

"I didn't change, but life goes on. The days change. You move on to the next day."

"The NBA is a business, but the fans make it like it's home. Fans make it feel like you're family."

And when asked about what his legacy with the Lakers will be, World Peace responded simply: "Honest."

On the Lakers' final possession, World Peace held the ball at the top of the key, fans and teammates urging him to shoot. But the game was already decided -- the Lakers would win their fifth straight. So World Peace just stood there and let the shot clock expire. He said he did it because he didn't need to shoot, but also, he laughed, because he was a bit tired, too.

From the sideline, Walton appreciated the gesture.

"It speaks to the person he is," Walton said. "I think his story and where he's come from and who he is now, he's come a long way. He's a perfect example of what pro athletes should be as far as the way he works, the way he gives back to the community, the way he mentors younger players. He respects the game of basketball."

In the final seconds, World Peace's teammates, for whom he would later autograph box scores, surrounded him in celebration, smiles all around.

"At the end of the day, you have to give yourself a chance," Robinson said. "That's what he always tells me. He always makes me believe I'm the best person on the court."

World Peace reflected on his own chances afterward. He said a year ago, then-Lakers GM Mitch Kupchak told him he had a 50 percent chance of making the team. World Peace liked those odds and made the roster.

This year, Kupchak told World Peace he had a 10 percent chance of making the team.

"Do you want to come?" Kupchak asked.

The Lakers wanted World Peace to focus on working with young players, and he accepted.

"You give me a 1 percent [chance], you might as well give me the spot," he said.

For all the ups and downs in his career, he calls this Stage 1 of the biggest highlights.

He hugged fans courtside, enjoyed an on-court television interview, and when Lakers public address announcer Lawrence Tanter rattled off the nightly statistics, World Peace came last, since he led the team in scoring. At the mention of his name, cheers erupted again.

World Peace smiled, paused the interview, and raised his hand into the air and offered a gesture that couldn't have been more fitting for what was likely his Staples Center farewell.

He formed two fingers into a V: the sign for peace.