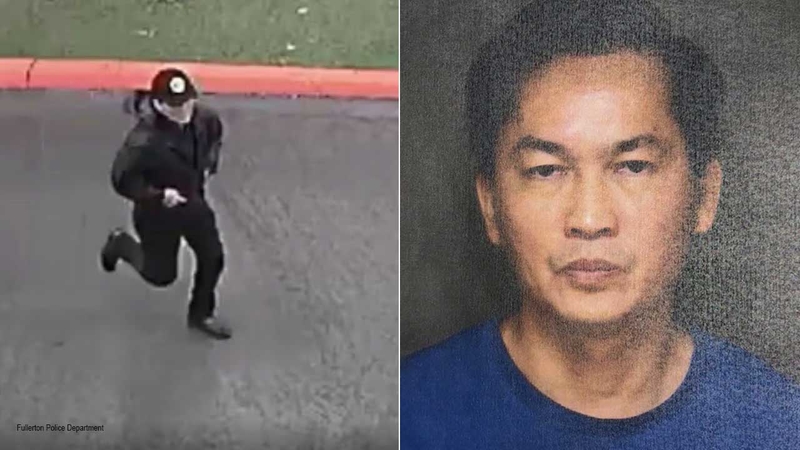 FULLERTON, Calif. (KABC) -- Police have made an arrest in the fatal stabbing of a retired administrator at California State University, Fullerton.

Steven Keung Chan, a 57-year-old resident of Hacienda Heights, was found stabbed to death on campus Monday morning. The stabbing led to a manhunt in the campus but the suspect at that time avoided capture.

The suspect was identified as 51-year-old Chuyen Vo. He was arrested at his residence in Huntington Beach, Fullerton police said at a press conference Thursday afternoon.

"Fullerton police detectives based on their investigation, that Vo acted alone during the planning and commission of this murder," said Fullerton Police Department Chief Robert Dunn.

Neighbors living along the same quiet Huntington Beach street as Vo said they were shocked to find out Vo, a man they knew as Chris, is behind bars accused of this crime.

"He's wonderful. He's very involved in his church. Some of the things that I've heard about him just doesn't sound like him," said Ila Fitzgerald, Vo's neighbor.

Other neighbors told Eyewitness News that Vo is a family man with at least two kids and a wife. Records show he's an insurance agent and has a hunting license. A spokesperson with the Orange County District Attorney's Office said charges are expected to be filed against Vo on Friday.

Police said Chan and Vo were co-workers but did not elaborate further on their relationship.
EMBED More News Videos

Surveillance video of the suspect sought in the fatal stabbing of a California State University, Fullerton administrator has been released.

The victim was found with multiple stab wounds in campus parking Lot S, on the corner of College Place and Langsdorf Drive, after somebody who witnessed the incident called 911 around 8:30 a.m. Monday. The suspect, initially described as a man in his 20s with black hair, black pants and a black shirt, was last seen heading eastbound on Nutwood Avenue. Authorities were using bloodhounds to try and locate him.