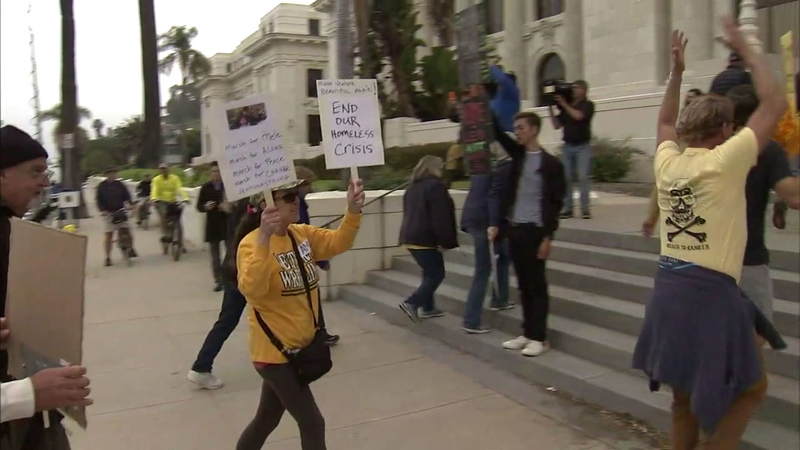 VENTURA, Calif. (KABC) -- Ventura residents demanded answers and actions from the city council after a father was stabbed to death by a homeless man while eating in a restaurant with his family.

The incident happened last Wednesday. Anthony Mele, Jr. was eating at the Aloha Steakhouse with his wife and their 5-year-old daughter. Police said a homeless man entered the restaurant and stabbed Mele in the neck, apparently at random with no motive.

The 35-year-old later died from his injuries.

Suspect Jamal Jackson, 49, was arrested shortly after the incident.

Residents said the incident demonstrates the need for the city to do more to address the homeless problem. More than 60 people showed up to the city council meeting Monday night to demand action.

"Last week as we all heard this family was sitting right here at this fine establishment and someone was brutally stabbed while having dinner with his family. This has to stop," said Ventura resident Leslie Owens.

Sparks flew during the meeting as people voiced their opinions during public comment.

Hours before, residents marched in unity to City Hall to express their frustration. Many wore yellow and held signs, while other people feel homeless is too often criminalized.

"I would implore the city to solve homelessness, not just push them to a different city," Mark Vlasquez said.

Judy Alexandre, chair of the Ventura Social Service Task Force, said policing the homeless isn't the right way to go about solving the problem either. She also said it's gone up about 13 percent in the last year, and that the city's homeless population doesn't come in from other areas.

"Our problem is we began to clean up some of the parks downtown to help the downtown business," she said.

City leaders mentioned that additional cameras will be added to the areas and monitored 24 hours a day. Park ambassadors will also be added to the promenade, where the stabbing occurred, and they'll be paid for by the city.