State of the City: Uber, Lyft will soon be able to pick you up from LAX 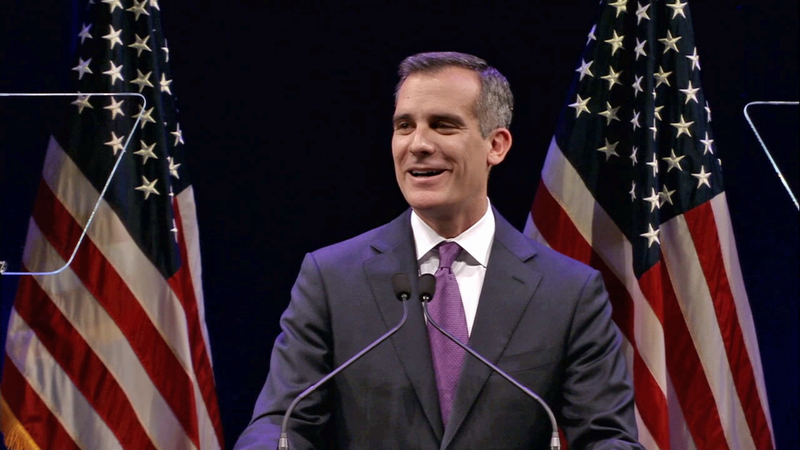 Uber, Lyft will soon be able to pick you up from LAX

NORTHRIDGE, LOS ANGELES (KABC) -- Los Angeles Mayor Eric Garcetti announced during the State of the City address on Tuesday that ride-share companies like Uber and Lyft will soon be able to pick you up at LAX.

"Whether it is your daily commute, or getting to and from the airport, we have to make navigating this city more convenient for our residents," Garcetti said during the annual speech.

The policy to allow the service will be in place by this summer. Currently, vehicles from ride-share companies are not allowed to pick up passengers at the airport -- only drop-offs are allowed.

On the drought, Garcetti said Los Angeles is leading the way on Gov. Jerry Brown's call for the removal of 50 million square feet of lawn in California.

"Governor, I can report to you today that with just 10 percent of the state's population, Los Angeles will reach half of your entire statewide goal by the end of this year," Garcetti said.

The mayor also announced that the city is implementing an earthquake plan so that Los Angeles is ready when "the Big One" hits.

"I hope this earthquake will not happen during my time as mayor, and God willing, not in our lifetimes at all. But it will happen. It's overdue," he said. "It is the most aggressive earthquake plan in the nation's history. It will save buildings and more importantly, save lives."

On the traffic mess in Los Angeles, Garcetti announced a new partnership with Waze.

"Now, when you open Google Maps or Waze, your smartphone will show you where the city has closed a road for repairs or for a movie shoot," he said.

Noting that Los Angeles is still the least affordable housing market in the country, Garcetti said his budget will include an additional $10 million for the Affordable Housing Trust Fund.

"Half of this money is being generated because, for the first time, we will collect taxes from Airbnb," Garcetti said.

The mayor is also promising residents cleaner streets. The Clean Streets Initiative will add 5,000 new trashcans over the next four years, which will result in an additional 10,000 tons of trash being picked up every year.