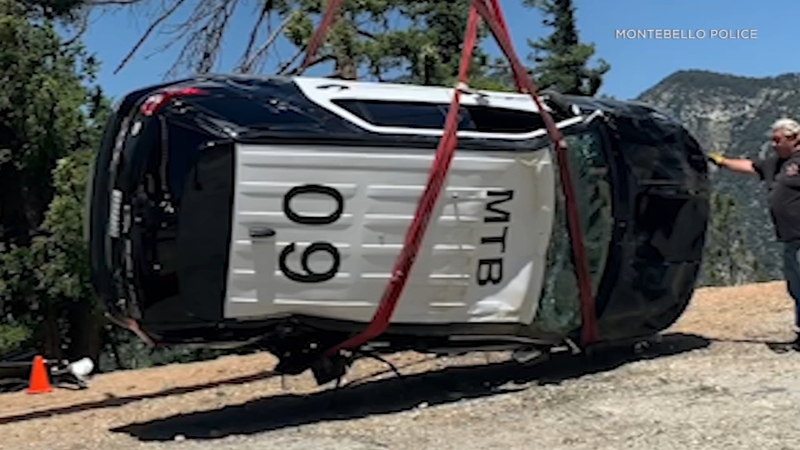 MONTEBELLO, Calif. (KABC) -- A stolen Montebello police cruiser was found in the Angeles National Forest and three suspects were arrested for the crime, police said.

The vehicle was stolen back in May somewhere in Montebello. Police investigators responded to a tip regarding the location of the car last month, and found the badly damaged vehicle in a remote area off Highway 2, off an access road, down the side of an embankment.

The cruiser had been stripped of various parts and equipment, according to a press release form Montebello police. A portion of a police rifle taken with the vehicle was recovered.

Authorities worked with the Task Force for Regional Auto Theft Prevention and the Bureau of Alcohol, Tobacco, Firearms, and Explosives to serve search warrants on the homes and vehicles of the three suspects.

They recovered what's believed to be the remainder of the stolen rifle, a Remington shotgun that was in the stolen patrol car, and the red and blue light bar from the vehicle.

They also recovered a stolen police radio from a previous crime. Police said about $26,000 worth of police radios were stolen from decommissioned police vehicles that were parked at a Montebello Unified School District Police parking lot.

The suspects, Eddy Saldivar, Hunter Crist and Matthew Moran, all in their early 20s, are facing charges of grand theft auto and possession of stolen property.

Investigators say each man had police-type equipment installed in their personal vehicles, including some items that were stripped from the stolen vehicle.
Report a correction or typo
Related topics:
montebellolos angeles countytheftcarpolice
Copyright © 2021 KABC-TV. All Rights Reserved.
More Videos
From CNN Newsource affiliates
TOP STORIES