Family members of the victim identified him as 23-year-old Sergio Marroquian of Los Angeles. The family told Eyewitness News that Marroquian's cousin was the driver of the vehicle in the Costa Mesa crash.
KABC
By Tony Cabrera, Rob Hayes and ABC7.com staff 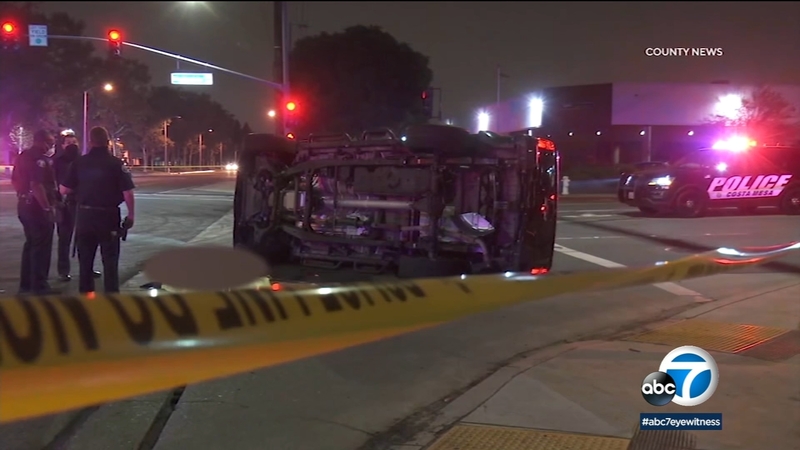 ORANGE COUNTY (KABC) -- A man was killed and two others were injured early Thursday morning in street takeover crashes in Costa Mesa and Anaheim that police believe are connected, including one in which the suspect is reportedly the victim's cousin.

A single-vehicle crash believed to be linked to a street takeover in Costa Mesa left one spectator dead and a passenger hospitalized in unknown condition.

Family members of the victim identified him as 23-year-old Sergio Marroquian of Los Angeles. The family told Eyewitness News that Marroquian's cousin was the driver and he was a passenger in the vehicle at one point while the truck performed donuts.

Family on scene tells me the victim was 23-year-old Sergio Marroquian from LA. They say it was his cousin who was the driver of the vehicle that struck him in the street takeover. They tell me Sergio did construction and was a good guy and was super funny. @ABC7

Police say the crash, in which the vehicle flipped on its side, happened around 2:30 a.m. after up to 100 vehicles began taking over the intersection of Sunflower and Hyland avenues.

Officials say the driver, who has not been identified, remained at the scene and was later arrested on homicide charges. A blood-alcohol test was administered as the scene, but the suspect is not facing DUI charges. Four others were also taken into custody.

Traffic came to a complete stop on the 5 Freeway in Norwalk when people began lighting fireworks on the lanes during an illegal takeover.

"Our investigators and our police department will aggressively seek out anybody that participated in this and we will seek prosecution for this," said Costa Mesa police Sgt. Zack Hoferitza. "A young man lost his life because of it. It looks like fun but it is not fun."

Police say street takeovers have been plaguing the Costa Mesa area over the past month. Participants have been throwing rocks and bottles at officers, as well as kicking patrol vehicles, according to authorities.

"They have formulated plans where they throw rocks at our officers, they do whatever they can do. They stand in front of us, 'cause they know we won't run 'em over so that they let the cars that are street racing get away," Hoferitza said.

There is also an Orange County task force to combat street takeovers.

Costa Mesa police say Anaheim authorities tipped them off that about 100 street racers were headed to the area after an incident in Anaheim, where the first street takeover crash was recorded by a bystander.

Cellphone video appears to show a suspect doing donuts at an Anaheim shopping center just before the vehicle drifted into a woman who was standing nearby. The car's rear end clipped the victim, flipping her into the air before she landed on the pavement.

People in Tustin defied stay-at-home orders and many appeared to ignore physical distancing guidelines during an apparent street takeover on Friday.

Paramedics arrived to treat a severe cut on the victim's head. Footage from the scene showed the woman, who had a significant amount of blood on her head, being loaded onto a stretcher and moved into an ambulance.

Officials say the victim was transported to an area hospital in stable condition.

One of her friends said she was conscious and talking.

"As we were walking, he slid right over here and hit our friend," said Mateo Cuves. "He was doing donuts and spinning around. She got hit by the driver, and she did a flip and hit the ground."

The California Highway Patrol said members of a street racing task force responded to reports of people planning to shut down the 57 freeway in Anaheim.

The incident happened around 1:30 a.m. at the Anaheim Plaza Marketplace. Anaheim police say there were several hundred vehicles in the parking lot at the time.

The first 911 calls were about street racing and vehicles performing donuts in the shopping center. As officers were responding, a caller reported a female bystander has been hit by one of the cars and was down on the ground.

According to authorities, when officers arrived at the scene, the woman was surrounded by a group of suspected street racers. Officials say the area is known for street racing. Multiple skid marks can be seen on the ground of the parking lot.

The vehicle was later found and a male suspect was taken into custody, police say.

A longtime newspaper editor was killed after his pickup truck was hit by a driver who was street racing with another vehicle in Santa Ana, police say.