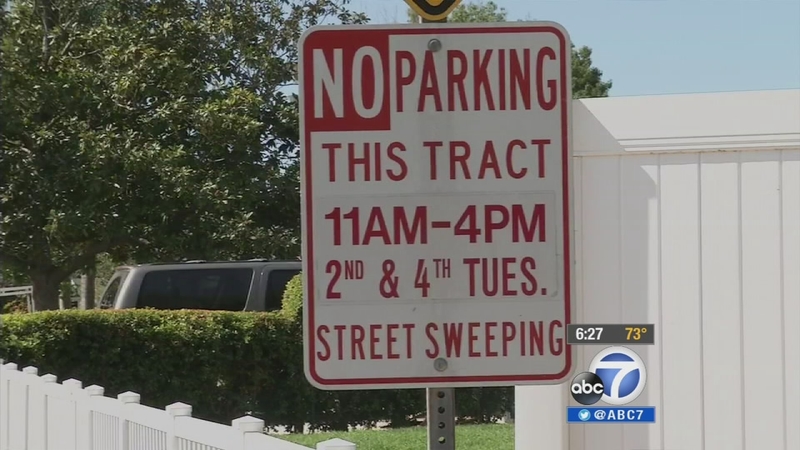 COSTA MESA, Calif. (KABC) -- Costa Mesa resident Paula Pokusa parks her car on the street in front of her house every day. But a recent $48 parking ticket took her by surprise.

Pokusa received the fine because she violated a posted parking sign that warns residents about street sweeping on the second and fourth Tuesday of every month.

But Pokusa says on her side of the street the closest sign is more than a half-mile away at the next major intersection, and that it is difficult for drivers to see it.

"It's really frustrating. If there's a sign right here, obvious, no one's going to park here. But we're not going to get out of the car and look around for 20 minutes to see if there's a street sweeping sign," she said.

Pokusa isn't the only resident frustrated with the signs. Several teachers at Newport Christian Montessori Academy, located on the same street, have also gotten parking tickets.

Resident and teacher Udeni DeSilva said the problem isn't just the scarcity of signs on the street but also the lack of clarity in the existing sign.

Pokusa has complained to the city but her neighborhood is unincorporated, which makes the area part of the county's jurisdiction.

"If you're expecting people to pay this and follow your laws, you need to make sure that they know what they are, and that starts with the signs," Pokusa said.

She has until Thursday to pay the fine or else it will increase. She said she intends to fight the ticket, even after she's made the payment.