The shooting victim is out of the hospital and is back to work.
KABC
By Eric Resendiz 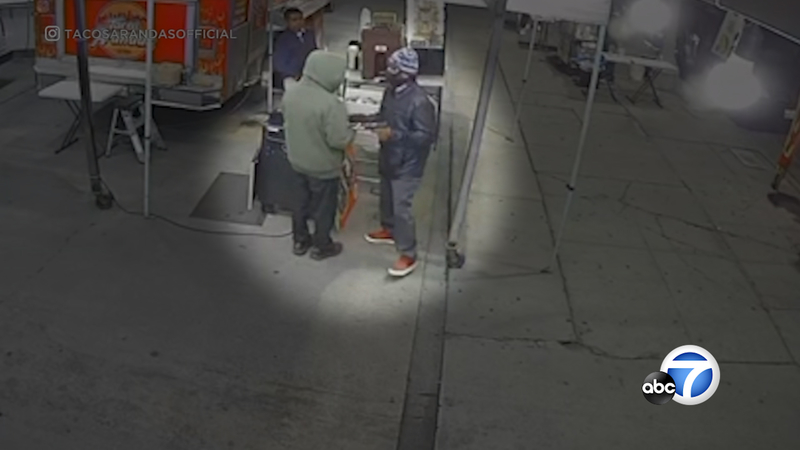 SOUTH LOS ANGELES (KABC) -- A suspect robbed two street vendors at gunpoint in South Los Angeles Saturday night and shot one of the vendors, according to LAPD.

Surveillance video shows when a man in a black jacket showed up with a gun at a food vendors' spot at Aranda's Car Wash near Florence Avenue and San Pedro Street. The suspect shot fruit vendor Pablo Briones in the foot.

STREET VENDOR SHOT: Two street vendors were robbed at gunpoint in South LA. The suspect shot one of the vendors and fled the scene, according to LAPD. The story at 4 p.m. on @abc7la pic.twitter.com/UlPuATvRv0

"At that moment I just noticed there was a vibration in my foot. I didn't feel anything. After my body started feeling the pain," said Briones. "We know that we are exposed to this kind of violence for selling on the street."

The suspect first approached David Jimenez, a taco truck worker at Tacos Arandas, then struck Jimenez in the head with the gun and took their money. Jimenez said the suspect is a previous customer.

According to LAPD, a second vendor tried to intervene. The suspect then targeted Briones and took his money. Briones said to the suspect "God Bless You" and that's when the suspect shot him in the foot and fled the scene. The victim was transported to a hospital.

"The bullet broke into two pieces and I have both of the bullet pieces in my foot. They couldn't take them out, it's in there," said Briones.

The suspect was arrested the next day, a firearm was recovered and felony charges were filed against the suspect, according to police.