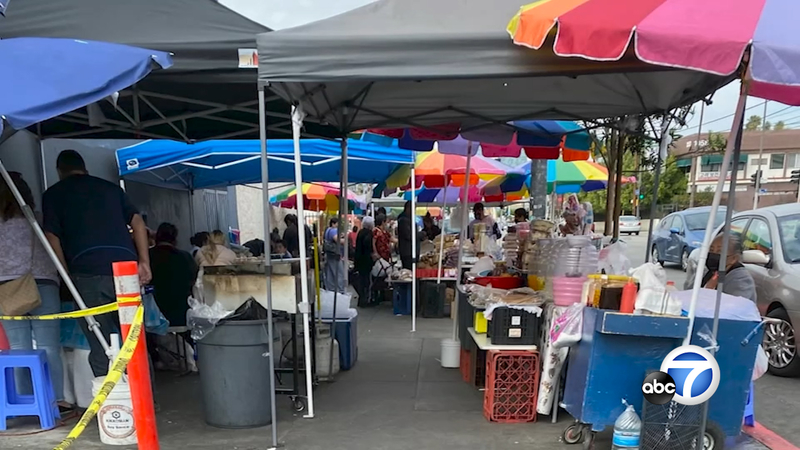 PICO UNION, LOS ANGELES (KABC) -- Tarps, carts, vendors and more used to cover some sidewalks in a Pico Union neighborhood on Vermont Avenue. Now, most of the sidewalks are now cleared. This comes this week after many residents voiced their concerns of unsanitary and unsafe living conditions in the area due to the vendors.

"So, there's a whole list. First, they would block the driveway. They would double park. Also, they would urinate between cars in the sidewalk. You know it was too much for us," said resident Jasmine. "It's disrespectful because I have a child. There was no access for any seniors to walk on the sidewalk."

The Office of Councilmember Gil Cedillo said after hearing the residents' concerns a beautification effort is underway to clean streets, sidewalks and storm drain systems in this area. They said the effort is to prioritize public safety for all.

"I am so happy the city is doing that," said resident Jovita Carrillo.

But some street vendors in the area said this is what they do for a living and their livelihood is at risk. Street vendors are meeting with organizers to figure things out.

"There are so many families that depend on this site. For example, my family -- this is where the income comes from," street vendor Bryan Fuentes told ABC7 in an earlier interview this week. "We don't want to move, but if we have to, I guess we must -- and many people are against it and we are going to fight until we can't to keep this place."

In a press release, Councilmember Cedillo said in part: "I allocated $500,000 for new vending carts and permits that will be provided to vendors. Salvadoran American Leadership and Education Fund will help vendors receive permits and educational material to know their rights and various regulations."

"We support them. But what we want is for them to be away from the sidewalk," Carrillo said.

Officials said organizers will help the vendors that were removed from the sidewalk to find other location options.