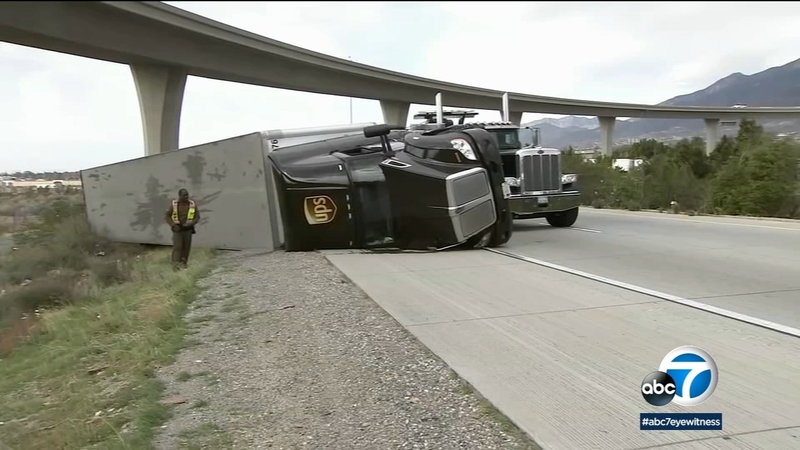 FONTANA, Calif. (KABC) -- Dangerous Santa Ana winds are whipping through the Southland, bringing increased fire danger and causing hazardous driving conditions as thousands are under the threat of having their power shut off.

Southern California on Tuesday will be hit with the trifecta of increased winds, low relative humidity and low moisture, prompting firefighters to be on alert.

A huge area is affected - from Santa Clarita to the high country, from the Los Angeles basin to the Santa Monica Mountains and all the way to the coast. In the highest elevations, gusts could reach up to 90 mph.

Those gusts posed a challenge for some drivers in Fontana Tuesday morning, where at least five big rigs flipped over near the 15 and 210 freeway interchange. Nobody was hurt, but several other drivers stopped on the side of the freeway to wait for the strong gusts to subside.

But perhaps even more concerning than driving a high-profile vehicle is the potential for fires.

"Right now we are under the gun," said Roland Sprewell of the L.A. County Fire Department. "We have an unrelenting wildfire season that just doesn't seem to want to let go."

In response, local fire departments are staffing up. They're sending strike teams to places highest at risk. They're also restricting parking in very high-fire severity zones to ensure fire trucks will have a place to park if a fire breaks out.

Nearly 43,000 Southern California Edison customers were without power Tuesday afternoon in anticipation of the winds, and even more were bracing for possibility that theirs might be shut off.

As of noon Tuesday, about 5% of of SoCal Edison's 5 million customers were under consideration for power shutoffs within the next 48 hours:

"Very strong and damaging winds are expected ... through Wednesday morning, and without rain in the last four weeks, forecasted high winds and high temperatures are bringing are elevated risk for wildfires," said Ron Gales with Southern California Edison.

In Anaheim, the strong winds prompted officials to close the mass COVID-19 vaccination site at Disneyland on Tuesday. Appointments for Tuesday will be rescheduled for another day, according to Anaheim city officials.

SCE customers can sign up for alerts to let them know if the power will be shut off.