Summit of the Americas met with various protests over exclusion of Cuba, Nicaragua and Venezuela

In one instance, ABC7 captured a woman being apprehended after reportedly approaching a motorcade with a bullhorn.
KABC
By Josh Haskell 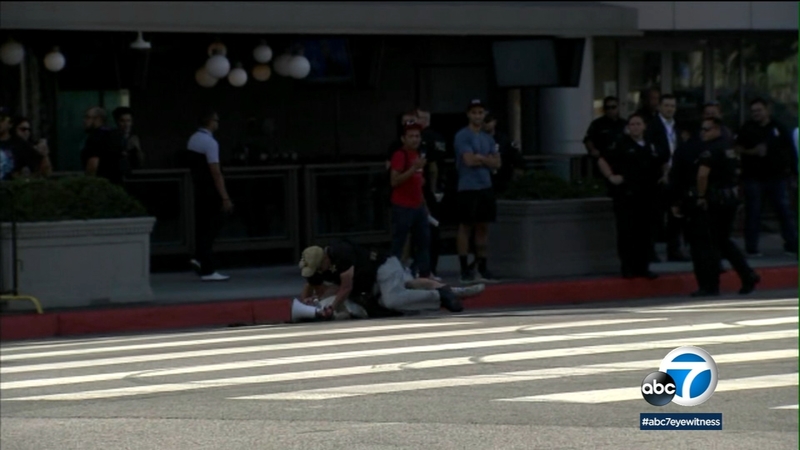 Summit of the Americas met with various protests in DTLA

LOS ANGELES (KABC) -- President Joe Biden, Vice President Kamala Harris and local leaders formally opened the 9th Summit of the Americas Wednesday in downtown Los Angeles, but it was met with some opposition.

The exclusion of three nations - Cuba, Nicaragua and Venezuela - has led to questions about the legitimacy of the event overall, and increased the presence of critics.

Various protests were held around the actual summit.

Meanwhile, a group of climate activists dropped a banner from the Seventh Street overpass of the 110 Freeway to protest what they called the Biden administration's reliance on fossil fuels, and demanding an end to fossil fuel drilling on federal lands.

Others protested human rights violations in various countries, including Cuba.

"We are tired of the promises of this administration," said protester Omar Gomez. "He promised in 100 days, he would make immigration reform, and he doesn't accomplish anything. There's no way we can wait for more voting this upcoming November."

Throughout an afternoon of protests, the majority of participants remained peaceful.

In one instance, however, Eyewitness News captured a woman being apprehended after reportedly approaching a motorcade with a bullhorn.

The woman - who was a protester - appeared visibly angry and was seen getting tackled by a U.S. Secret Service member.

Details surrounding the apprehension are unknown.

The L.A. gathering for the Summit of the Americas is the first time a U.S. city has hosted the event since 1994, when the inaugural conference was in Miami. Representatives from the Western Hemisphere began arriving Monday.

The summit convenes once every three or four years.

The summit, organized by the White House and the U.S. Department of State, will continue through Friday with a focus on "Building a Sustainable, Resilient and Equitable Future'' in the Americas.

According to the U.S. State Department, the meeting promotes regional cooperation and helps address the region's most pressing issues, including increasing economic competitiveness, enhancing access to technology, countering trafficking and promoting democracy and human rights throughout the Americas.

During the most recent summit -- which was in Peru in 2018 - the region's leaders committed to fighting corruption, according to the U.S. State Department.