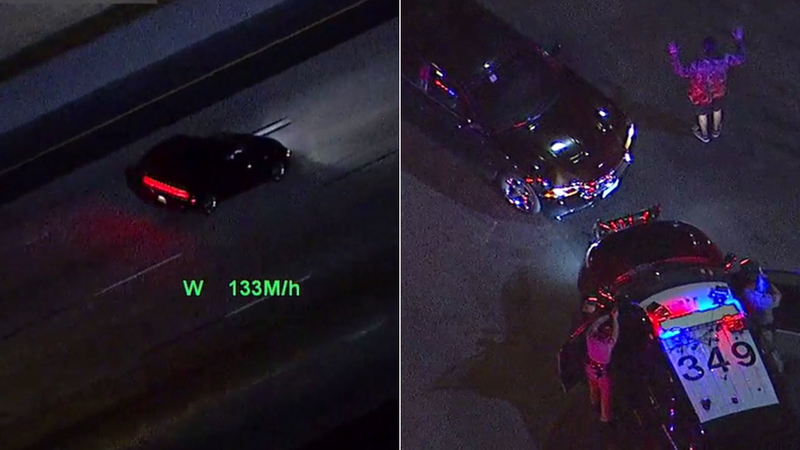 Suspect in custody after chase in LA, OC counties

LOS ANGELES (KABC) -- A suspect in a stolen vehicle, who led authorities on a high-speed chase in Los Angeles and Orange counties, was taken into custody following a successful PIT maneuver by California Highway Patrol officers Monday night.

The male suspect reached speeds above 100 mph on several freeways, including the 110, 10 and 60 freeways.

At one point, patrol vehicles lost the fast-moving Dodge Charger, which reached up to 119 mph on the 60 Freeway in Hacienda Heights.

California Highway Patrol vehicles re-engaged in the pursuit in the Rowland Heights area.

The driver then got onto the southbound 57 Freeway in the Diamond Bar area, weaving through traffic across several lanes.

The driver made his way into Orange County, traveling at triple-digit speeds on the southbound 57 in Anaheim before making a transition to the eastbound 22 Freeway.

The Dodge was seen slowing down to about 85 mph while transitioning onto the northbound 55 Freeway in the city of Orange.

The driver then went back into the Anaheim area through the westbound 91 Freeway, where 130 mph speeds were reached.

In Artesia, the stolen vehicle got onto surface streets, where multiple patrol vehicles followed close behind and performed a successful PIT maneuver.

Officers were seen getting out of their vehicles, armed with weapons as they asked the driver to get out of the car.

The man got out of the car with his arms up and eventually put his hands behind his head, following officers' orders.

Officers were able to take the suspect into custody without incident.