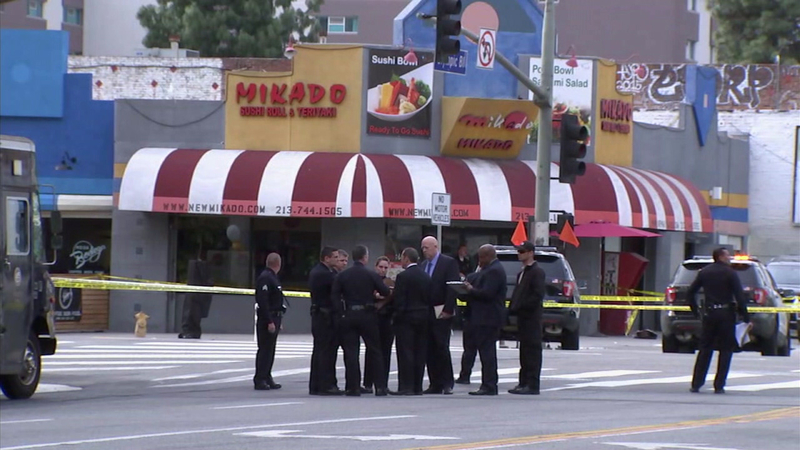 Man armed with pipe fatally shot by police in DTLA

The incident happened around 12:30 p.m. at the intersection of West Olympic Boulevard and South Broadway, according to the Los Angeles Police Department.

"Someone here was concerned enough that they made a 911 call ... related to that individual and his actions, which is, he was armed with this large pipe," LAPD Detective Meghan Aguilar told reporters at the scene.

Two LAPD officers responded to the street corner, where a man was allegedly wielding a 4-to-5-foot long pipe in front of a restaurant.

Clara Rios, who owns a nearby business, recalled seeing two civilian "gentlemen, angry and antagonizing each other down the street."

"When they hit the corner, it just kind of went from an angry fight to something else," she said.

According to investigators, police attempted to subdue the armed man with a Taser, and one officer opened fire twice after the suspect repeatedly refused to put down the pipe.

It was unclear how many times the man was struck by gunfire. He was identified only as being over 50 years old. The second man was being sought.

At least one bystander recorded part of the encounter on cellphone video, which appears to show the officers each pointing a handgun at the man as onlookers stand nearby. Detectives will review that footage and dashcam video as part of their investigation, officials said.

Although LAPD Central Division officers have been equipped with body cameras, the cameras of the officers involved in Saturday's shooting were not turned on at the time.