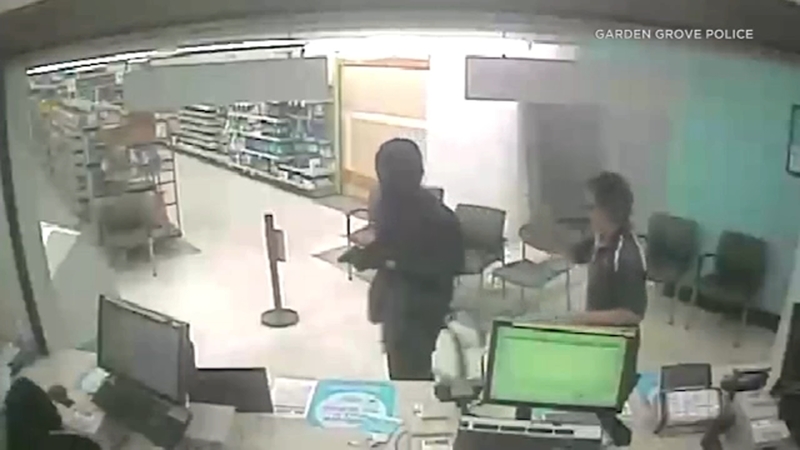 GARDEN GROVE, Calif. (KABC) -- Suspects were on the run after a brazen robbery turned into a wild police chase and a fiery crash in Garden Grove.

Five suspects were seen on surveillance video entering a Walgreens Friday at 4 a.m. They headed to the pharmacy counter in the rear of the store where one of them pointed a gun at employees.

"One of those suspects was armed with a handgun. Another suspect jumped over the counter and began to steal codeine bottles from the pharmacy," said Sgt. Mark Lord, Garden Grove Police Department.

The suspects were all wearing dark clothing and gloves. Their faces were covered.

Authorities said the robbery lasted only minutes. No one inside the Walgreens was harmed.

"Two additional suspects were at the front of the store. A few moments after they obtained some codeine bottles and cash, they fled the store," Lord said.

During a brief chase from Garden Grove into Anaheim, the vehicle carrying the robbery suspects started smoking. The men bailed out of the car moments before it went up in flames.