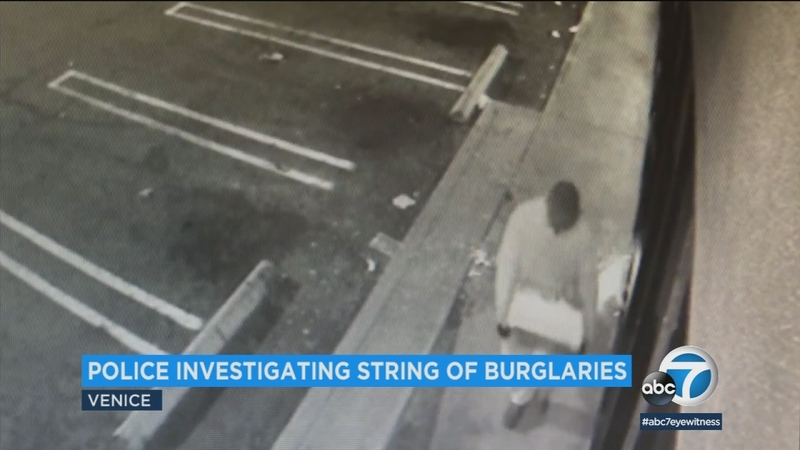 WESTCHESTER, LOS ANGELES (KABC) -- Authorities in Westchester are investigating whether a smash-and-grab at a Japanese restaurant is linked to two other burglaries in Venice.

Officers entered the restaurant with their guns drawn to clear the building.

The owner of San Sai Japanese Grill, Samual Kim, said there were two suspects - one of them entered the location and the other waited outside. Surveillance video showed they fled in a dark-colored car.

Investigators said a small amount of cash was taken from the location.

A search for the suspects remained ongoing as an investigation continued.

Officers also responded to a call of a break-in at about 1:45 a.m. at two businesses in a strip mall near Lincoln Boulevard and Rose Avenue. The doors were also smashed in the two incidents.

Surveillance video shows the suspects at work: One man goes for a restaurant and the other hits Globe Cleaners just a few doors down.

The burglaries happened in seconds, leaving behind a trail of broken glass. It was unclear what was taken from the businesses, but workers said it's not the first time they've been targeted.

Globe Cleaners is planning to beef up security and add surveillance cameras.

In the meantime, police will be looking for clues from the cameras already in place to try and track down those responsible.