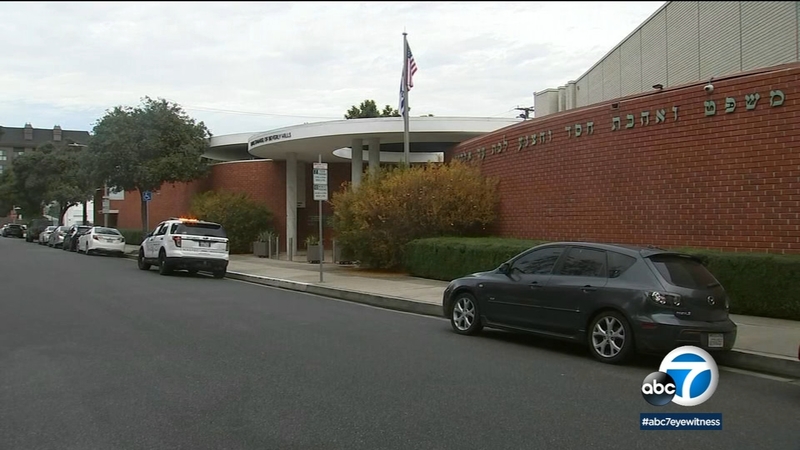 Police increase patrols near synagogues in LA and Beverly Hills

LOS ANGELES (CNS) -- Los Angeles-area law enforcement authorities are continuing to monitor local Jewish houses of worship following a 12-hour standoff with a suspect at a synagogue in suburban Dallas who held four people hostage before he was shot and killed.

All of the hostages, including a rabbi, were released unharmed, Texas authorities said late Saturday. They did not disclose whether the suspect was killed by law enforcement officers or a self-inflicted gunshot.

"Grateful the hostages are safe,'' Los Angeles Police Chief Michel Moore tweeted. "@LAPDHQ has worked to communicate with our local Jewish & Muslim community leaders thru out the day and augmented patrols. We remain in close contact with our Federal Intel partners for any potential connection to LA.''

No threats were reported in Southern California.

The armed suspect entered Congregation Beth Israel synagogue in Colleyville, Texas, outside the Dallas/Fort Worth area, shortly after 10:30 a.m. Saturday while services were being livestreamed on Facebook. The incident sparked concern within the Los Angeles-area Jewish community and prompted the stepped-up response from local law enforcement agencies.

An armed gunman is dead and four hostages are safe after a 10-hour standoff at a Texas synagogue Saturday night.

"We're closely following a hostage situation that is taking place at a synagogue in Colleyville, TX,'' the Los Angeles Police Department tweeted Saturday afternoon. "We're working with our federal partners, increasing patrols around synagogues in LA as a precautionary measure, and conducting community outreach to ensure the safety of Angelenos.''

"Once again synagogues and Jewish schools must elevate their defensive measures, not only against neo-Nazis, but Islamist terrorism and violent hate,'' Rabbi Marvin Hier, CEO and Founder of the Simon Wiesenthal Center and Abraham Cooper, an associate dean at the center and director of Global Social Action said in a joint statement.

"As we pray for the safety of the hostages, it is up to all Americans committed to the safety of our nation to ensure that all houses of worship will be safe from future attacks.''

Rabbi Noah Farkas, president & CEO of the Jewish Federation of Greater Los Angeles, called the hostage taker's action "a sobering reminder of the threats of antisemitism that continue to face Jewish communities both across the United States and here in Los Angeles. The Jewish Federation of Greater Los Angeles' mission is to keep our beloved Jewish community as safe and secure as possible and we are coordinating with local law enforcement and our own Community Security Initiative (CSI).

"Let us also remember that we are not defined by antisemitism. Antisemitism is a consequence not a cause. To be a Jew is to love life, redemption, peace and justice.''