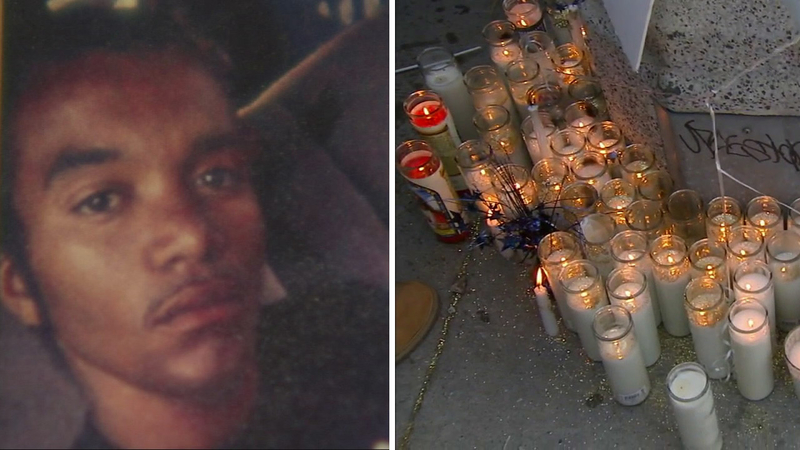 SOUTH LOS ANGELES (KABC) -- Authorities are searching for a suspect who gunned down a developmentally disabled man because he was wearing red shoes in South Los Angeles.

Tavin Price, 19, was shot four times in the back and chest. He was rushed to a hospital, but died while he was in surgery, his mother Jennifer Rivers said.

He weighed less than 100 pounds and was less than 5 feet tall. Investigators say he was murdered because the gunman was angry that Price was wearing red shoes, the color of which is associated with a specific street gang.

Los Angeles police detective Eric Crosson, who is investigating the incident, said all that is known so far is that Price was just getting his car washed and that he was not affiliated with any gang.

The shooting happened Friday around 11 a.m., just outside a car wash near the corner of Florence Avenue and Crenshaw Boulevard.

Rivers said her son went inside the nearby store to buy a cigarette when he was approached by a man who asked Price to remove his shoes.

Price walked back to his mother who was at the car wash with him and told her what the man had said to him.

The suspect ended up following Price back to the car wash where he ended up opening fire.

She tried to run after the man, but he got away.

"I wish he would have just shot me instead of my child because that's cold for a mother to watch somebody just gun her child down in front of her face. That's a hard, hard thing to deal with, believe me," Rivers said, "I can't even sleep at night since my son died."

Police said there is surveillance video of the shooting and detectives are working on several leads, but so far no arrests have been made.

A vigil was held at the car wash Monday by Price's friends and family members. He would have turned 20.

The group gathered around the small memorial to sing him happy birthday and release balloons in his memory. LAPD detectives also attended the vigil looking to speak with other witnesses in the area who they had not had time to speak with.