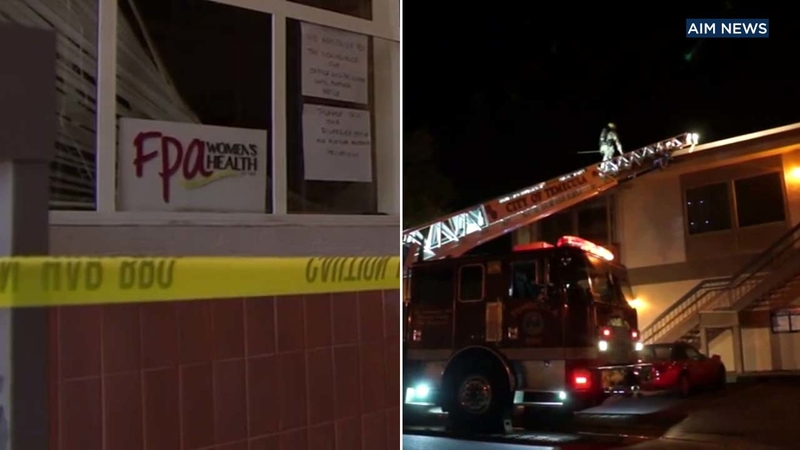 TEMECULA, Calif. (KABC) -- An investigation is underway after a fire erupted in a Temecula building that houses a women's clinic that offers abortions.

The Riverside County Fire Department's arson investigators have not deemed the blaze suspicious in nature. However, a member of the cleanup crew told Eyewitness News that it looked like a Molotov cocktail was thrown through the window.

The fire at the FPA Women's Clinic, located in the 41700 block of Winchester Road, was first reported at 1 a.m. Wednesday.

Fire officials received a call from the alarm company, reporting that the automatic fire sprinkler system had been activated. By the time firefighters arrived, the fire was out.

According to its website, FPA offers various women's services, including pregnancy testing, birth control and abortion.

Temecula 24-hour Urgent Care is located on the first floor of the building right under the women's health clinic. An urgent care employee said when she smelled smoke, she ran upstairs to help put the fire out.

That employee said to her knowledge, this is the first time something like this has happened to the women's clinic.

"There's been protesters but they've never been violent or anything, so they've been peaceful protesters," said Michelle Abercrombie, public relations coordinator for the urgent care facility.

Abercrombie said the urgent care clinic incurred some water damage to its administration side, but the clinic is open for business.

It was unclear how much damage the women's clinic incurred in the fire.