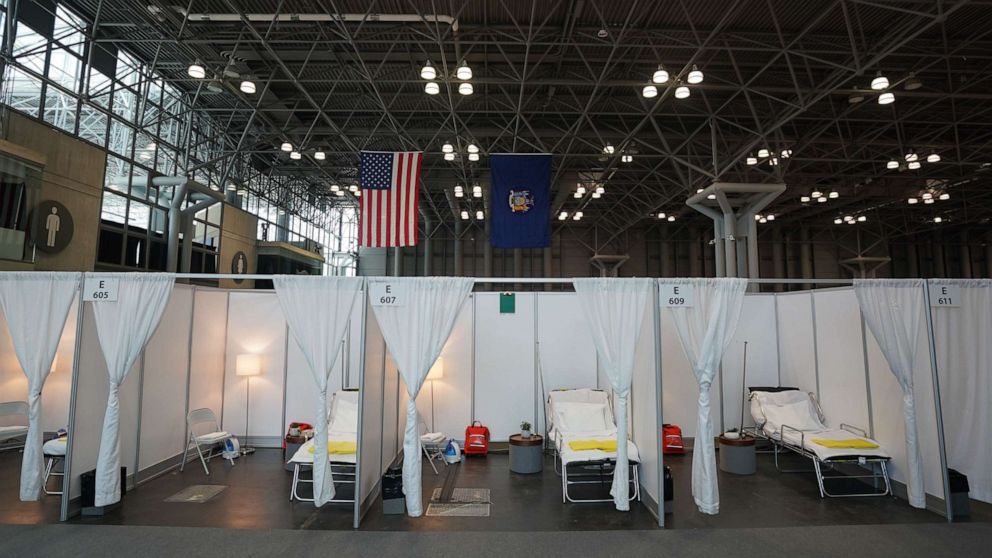 With the Army's help, the temporary field hospital at New York City's Javits Convention Center could be able to house 2,910 beds, making it one of the largest hospitals in America. Established in record time, the temporary hospital is an example of the surge of federal and military resources into New York to help with the novel coronavirus pandemic, including the Army Corps of Engineers, two Army field hospitals, and the Navy's hospital ship the USNS Comfort.

Over the last week the Army Corps of Engineers has been busy transforming the convention center's expansive exposition halls into an overflow medical facility that beginning Monday will treat patients who are not infected with the novel coronavirus. The treatment of non-COVID-19 patients is designed to make it easier for medical facilities in New York to focus treatment on patients infected with the virus.

Originally slated to house 1,000 beds composed of four Federal Emergency Management Agency field hospitals, the Army Corps of Engineers took advantage of the convention center's design and the arrival of 184 more beds from two Army field hospitals from Fort Campbell, Kentucky, and Fort Hood, Texas, to expand the scope of how many beds there could be at the temporary hospital.

Army officials said they saw they could add more patient pods in the convention space than had been planned. Each hospital bed will be enclosed in a "pod" of three temporary walls and a curtain entrance into the area that will house an individual patient.

"We basically took that four [multiplied] by 250 is 1,000. We thought we could expand it by stretching the ratio," Gen. Todd Semonite, the head of the Army Corps of Engineers, told reporters Friday. "So today we're going to plan on having 2,910 rooms up by Monday morning in the Javits Center."

For now, the hospital will hold about 1,200 hospital beds but with the likely arrival of more hospital beds requested by New York Governor Andrew Cuomo the potential of 2,910 beds will make the Javits Center hospital larger than the 2,600 bed capacity of New York- Presbyterian Hospital, the city's largest hospital.

"The Javits Center is an amazing facility," said Semonite. "Every 10 feet there's a great big steel door in the floor, you open it up in there is all the electrical; there's cold water, there's hot water and there's a place for sewers, so you can actually do things like sinks, right in the middle of a convention center to be able to make that happen."

Non-COVID-19 patients will be transported from hospitals in the New York City area to the convention center, just as they will be at the 1,000-bed Navy hospital ship the USNS Comfort when it is operational in New York Harbor on Tuesday.

Earlier this week, three of the Army's six field hospitals were ordered to assist in the treatment of non-COVID-19 patients with one of them headed to Washington state and the other two to New York City.

"This is obviously the absolute top priority of the nation right now, and knowing that our very well-trained and capable [531st] Hospital Center is going to be part of this makes us really proud," Maj. Gen. Brian Winski, the commander the 101st Airborne Division, told ABC News in an interview.

"They're well trained, they're prepared and readiness is our watchword; they're prepared to deploy in a moment's notice, which is exactly what they did and they are going to make a huge impact," he added.

While the medical personnel from the 531st Hospital Center will not be treating non-COVID-19 patients, they will still follow guidelines to ensure they do not become exposed to the virus during their deployment.

Prior to their departure, Winski told his soldiers that the length of their deployment to New York will likely be "a matter of months, not weeks" and that his command will do their best to ensure that they and their commands are kept informed of when they will come home.

Their prolonged stay will also have an impact at Fort Campbell's Blanchfield Army Community Hospital where most of the personnel from the 531st are normally assigned.

"It is requiring us to reorganize," Winski said, acknowledging soldiers' deployment will lead to staff adjustments at Blanchfield to ensure that facility can treat COVID-19 cases at Fort Campbell.

"We're going to adjust how we're organized up there to ensure that we are configured as best as we can possibly be for larger numbers of COVID-19 patients that require hospitalization."
Report a correction or typo
Related topics:
abc newsnational
Copyright © 2021 ABC News Internet Ventures.
More Videos
From CNN Newsource affiliates
TOP STORIES