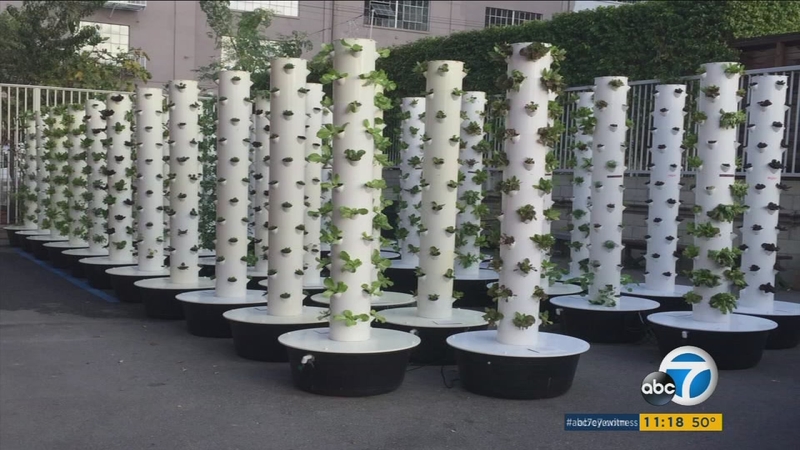 CANOGA PARK, LOS ANGELES (KABC) -- A Los Angeles company has a new way to help you get greens into your diet and it could also help with California's drought.

Green City Farms allows you to grow your own salad, redefining the local produce movement. Their hydroponic towers are at several Tender Greens restaurants around Southern California.

At the Tender Greens at the Westfield Topanga, customers had no idea their salads were grown using towers on the restaurant's patio.

"I thought they were just for decorations," Matt Mallel of Tarzana said.

Erik Oberholzter is co-founder of Tender Greens and said he wants people to have more access to fresher foods.

"Our mission really is to broaden the access of real food," Oberholzter said. "The closer product is grown to the restaurant or the plate the better it is going to be."

Green City Farms installed and maintains the tower gardens on the restaurant's patio.

Robert Foreman helped invent the system in the midst of the Golden State's record drought.

"We use 85 to 90 percent less water than you would traditionally," Foreman explained.

Since the plants grow vertically, they take up a lot less space than traditional farming as well.

Chefs can trim the produce after it harvests for two to four weeks and instantly make it part of a daily special.

"You hear farm to table, this is really straight to the plate," Foreman said.

Oberholzter even has a tower at his home.

"Honestly in one of these towers I grow more food than I can keep up with," he said.

The Culver City based Tender Greens plans to use the towers as they expand from the West Coast to the East Coast.

"We can essentially replicate the California growing conditions when we go to New York or D.C. or Chicago," Oberholtzer said.

Going forward, Oberholzter and Foreman said they hope the systems are part of a larger food revolution.