Weatherford College pitcher Owen Woodward is now facing expulsion after a hit on his opponent during a game.
KTRK
By Chaz Miller 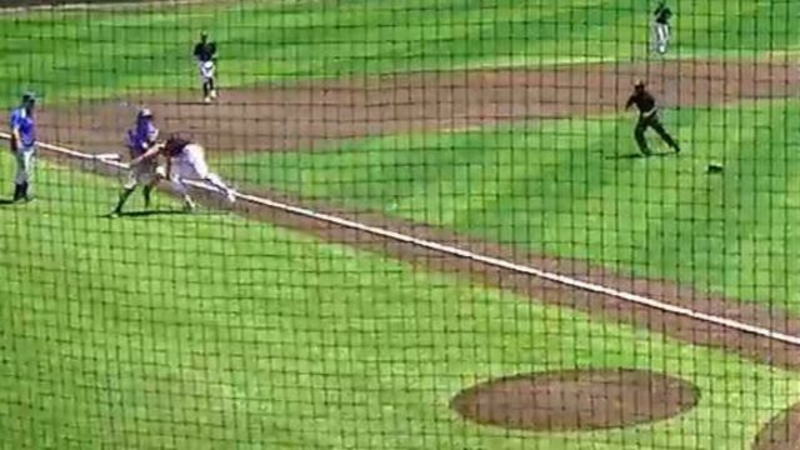 WEATHERFORD, Texas -- Tackles are usually in football, but you wouldn't be able to tell that judging by what happened on the baseball field in Weatherford, Texas, on Wednesday after a pitcher charged at and took down a hitter during a college game.

Now the North Texas Junior College Athletic Conference has announced that it suspended both players and many more from both teams due to the resulting brawl. The batter also was suspended for two games because he was ejected for taunting.

By early afternoon Thursday, the video of Weatherford College pitcher Owen Woodward, a sophomore, sprinting toward North Central Texas College's Josh Phillips and tackling him to the ground had been viewed at least 4.6 million times and counting on Twitter.

The viral moment shocked announcers as you can hear the tone from one of them change from regular play-by-play calling to shock.

"North Central has taken the lead here in game one. Oh! Oh my. Oh no. Oh no," he said as the attack unfolded. "That was out of nowhere. Woodward just attacking Phillips right there."

In the top of the sixth inning, Phillips, a freshman from the Cypress area, hit a go-ahead home run.

As he was rounding the bases and celebrating with his third base coach, Woodward threw down his glove, charged and hit him, knocking off Phillips' helmet.

Phillips got back up and made it to home plate anyway, and umpires suspended the game.

After the hit, Phillips' teammates ran out to third base, with some piling on top of Woodward.

But the hit is proving costly for both Woodward and members of the North Central Texas program because of the players who ran onto the field after the hit.

If that leaves North Central Texas without enough players for its next two games against Weatherford, it will have to forfeit, the league said. Both teams were ordered to forfeit the game that was stopped.

As of Thursday, the teams are set to face each other again on Saturday at noon and 3 p.m. in 7-inning and 9-inning games respectively.

As for Woodward, Weatherford College released a statement saying that he will face potential disciplinary action up to and possibly including expulsion.

Weatherford College Police Department is also investigating, along with both schools.

A statement regarding today's incident at the WC baseball game. pic.twitter.com/QbKiaK63vs

Jeff Lightfoot, Weatherford's head baseball coach and assistant athletic director, said he was "shocked and disappointed" by what happened.

"We are completely embarrassed by this incident, and we apologize to North Central Texas College and the fans of WC baseball. This type of behavior cannot be tolerated," Lightfoot said in part.

The coach added that Woodward had not been involved in any incidents like this before.