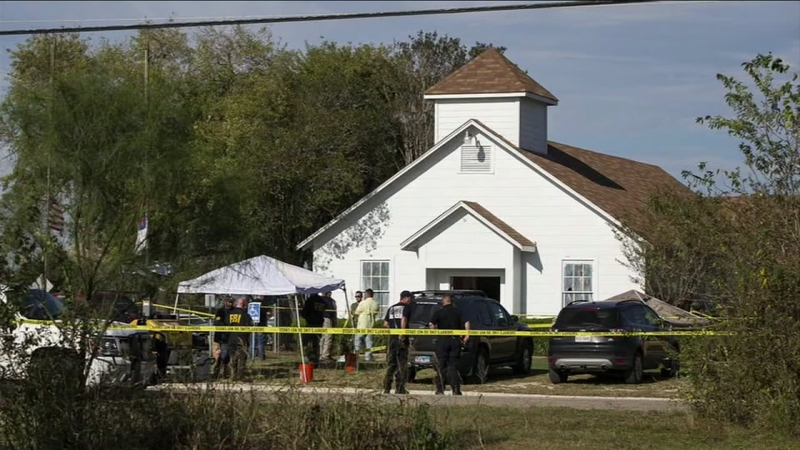 SUTHERLAND SPRINGS, Texas (KABC) -- At least 26 people were killed and about 20 injured after a shooting at a church in Sutherland Springs, Texas, the state's governor said Sunday.

Families pray outside San Antonio church as they wait to hear about loved ones.

Authorities said at 11:20 a.m., a suspect dressed in all black was spotted at a Valero gas station across the street from First Baptist Church. He then drove to the church, exited his vehicle and opened fire outside.

Authorities said as the suspect was leaving the church, a citizen grabbed his own weapon and engaged the suspect, who fled the scene.

The suspect dropped what was described as a Ruger model AR-556, a variant of an AR-15 rifle.

MORE: What we know about the suspected gunman in the Texas church shooting

The citizen chased after the suspect, who ran into his vehicle and drove off. As police were responding to the shooting, the suspect lost control of his vehicle, crashed and was found dead inside.

Authorities said it was unclear if the shooter died of a self-inflicted wound or during the confrontation with the citizen.

Multiple victims, ranging in ages from 5 to 72, were among the dead and others transported to nearby hospitals. Twenty-three people inside the church were killed and two others were found outside. One person later died at a hospital, authorities said.

Among those killed was Annabelle Pomeroy, the 14-year-old daughter of the church's pastor, Frank Pomeroy, and his wife, Sherri. The couple were out of town at the time of the shooting.

The FBI also responded to the scene of the massacre.

Authorities are searching Kelley's social media accounts and said that in recent days, he showed off what appeared to be an AR-15 style gun on his Facebook page.

A LinkedIn account possibly connected to Kelley indicated he may have had a military background. The Air Force later confirmed to ABC News that Kelley served from 2010 until he was discharged.

A spokesperson for the Air Force also said that Kelley was court-martialed in 2012 for assaulting his wife and child. He then received a bad conduct discharge.

Kelley then spent a year in the brig at Holloman for the offenses and got out in 2013, a source told ABC News.

An ATF source said that agents are also searching Kelley's home for explosives.

People outside the church were filmed crying and holding hands as they prayed together in the wake of the tragedy.

Texas Attorney General Ken Paxton issued a statement in the wake of the shooting.

"The thoughts and prayers of all Texans are with the people of Sutherland Springs as tragic reports come out of First Baptist Church. My office stands ready to assist local law enforcement as needed. Please join Angela and me as we pray for those impacted by this horrific shooting."

President Donald Trump tweeted, "May God be w/ the people of Sutherland Springs, Texas. The FBI & law enforcement are on the scene. I am monitoring the situation from Japan."

May God be w/ the people of Sutherland Springs, Texas. The FBI & law enforcement are on the scene. I am monitoring the situation from Japan.

"While the details of this horrific act are still under investigation, Cecilia and I want to send our sincerest thoughts and prayers to all those who have been affected by this evil act. I want to thank law enforcement for their response and ask that all Texans pray for the Sutherland Springs community during this time of mourning and loss."

The small, white, wood-framed church with a Texas flag on a pole at the entrance usually had a morning worship scheduled for 11 a.m.

Sutherland Springs is a community of about 400 people, 30 miles southeast of San Antonio.