The Heavenly Center offers many holistic options. What it does not do is remove people from the program for using marijuana.
KABC
By Phillip Palmer 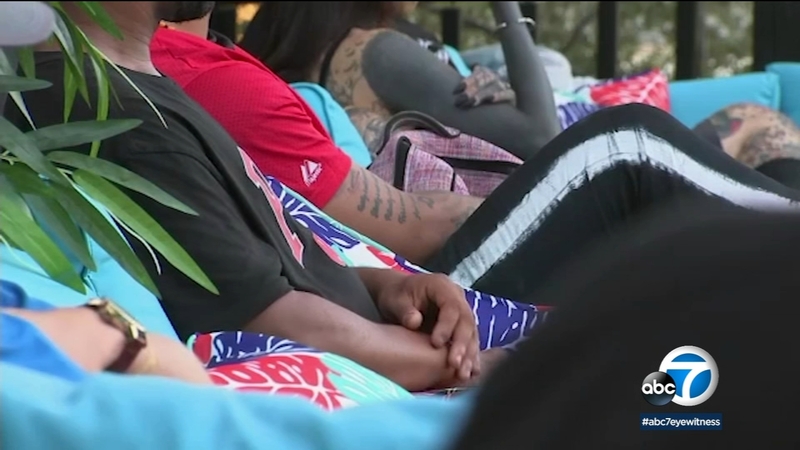 STUDIO CITY, LOS ANGELES (KABC) -- The opioid epidemic is a huge problem across the country and despite decades of research on effective ways to treat it, overdose deaths are at an all-time high.

Most traditional addiction treatment programs work on an abstinence-based model, but the Heavenly Center in Studio City is not traditional.

"As long as our guests are saving their lives and we're helping, that's all that matters," said co-founder Steve Lobel, a music industry heavyweight who has worked with performers like Nipsey Hussle and Run-DMC.

Sober studio sessions are often led by co-founder Scott Storch, a talented producer and songwriter, who uses music as a way to heal.

"Having music be a part of their life and being able to feel the music expressions when they come into this room for this particular part of the recovery, I think it's very helpful," Storch said.

What the Heavenly Center does not do is remove residents from the program for using marijuana.

Overdose deaths from meth, other drugs up in LA County during pandemic
EMBED More News Videos

Fueled by the pandemic, Los Angeles County is seeing a marked increase in deaths linked to accidental overdoses on meth and other drugs, a new report says.

"It is a shock to a lot of people. And we're definitely the pioneers in this," said Nick Morgan, the center's Director of Outreach.

Experts believe marijuana can be addictive in about 30% of users, leading most centers to conclude it's counterproductive. But medical cannabis is becoming a new treatment option.

While it's not prescribed at the Heavenly Center, clients can opt-in to cannabis-assisted treatment with a counselor providing education and guidance.

"We kind of allow people to come as they are...whatever that looks like and (acknowledge) that recovery is not a one-size-fits-all...it's very individualized," said Clinical Program Director Janae Borrego.

"If you think you're coming here to smoke weed and go in the studio, you're going to be sadly mistaken," said former resident Jeffrey Jones.

As many as 85% of people will relapse within 12 months of starting rehab, primarily due to intense withdrawal symptoms, but several pre-clinical studies have shown cannabis decreases opioid withdrawal symptoms. It's easier to access and, proponents say, has less risk than traditional medications.

"If you don't take that medication, you're physically ill. You're even going through more of a withdrawal cycle than you would from heroin itself," Morgan said.

Storch knows firsthand the dangers of drug abuse, having lost over $70 million due to a cocaine habit. But he also believes cannabis helped him.

"I feel like I'm living proof that it can actually cushion the blow for drug addiction," he said.

"We are going to every green state and opening a Heavenly Center. There's really no roadblocks or obstacles... we're just going to go do it," Lobel said.