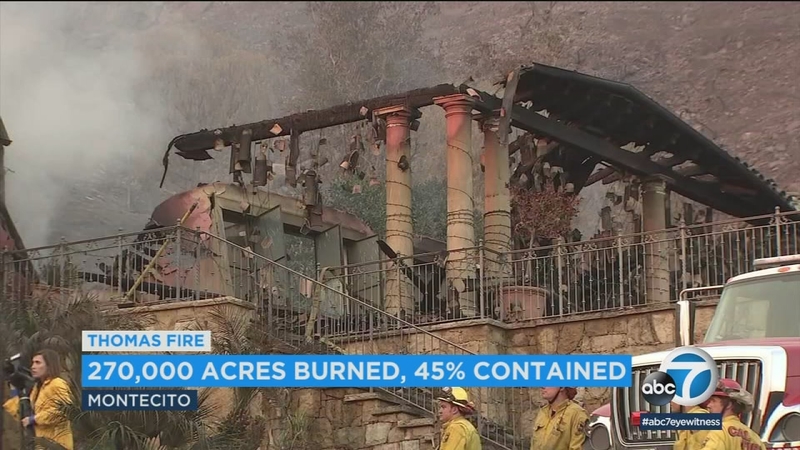 MONTECITO, Calif. (KABC) -- Crews battling the Thomas Fire hope to take advantage of calmer winds and cooler temperatures to try to get the upper hand on the massive blaze as it continues raging through Santa Barbara County.

They have a two-day window before potentially dangerous gusts return later this week.

Firefighters say they have made good progress stopping the advance of flames toward Santa Barbara but the fire continues to burn more to the north and east in the Los Padres National Forest. Some 18,000 structures are still considered threatened by flames.

As the Santa Ana winds picked up over the weekend, the Thomas Fire destroyed several homes in Montecito.

They were planning a "heli-torching" operation north and west of Ojai on Highway 33. That involves lighting fires from a chopper to burn off fuel in a controlled manner before the Thomas Fire flames reach that area. They want to reduce fuel back to the area burned by the Zaca fire in 2007.

The Thomas Fire has consumed about 270,500 acres in Ventura and Santa Barbara counties, and destroyed more than 1,000 homes, making it the third largest wildfire in California history.

It was estimated at 45 percent containment.

Evacuation orders remain in place for Montecito and Summerland, but some orders were lifted

Firefighters say the Santa Ana winds flared up over the weekend, driving the flames toward Montecito and destroying at least three homes there.

"We had strong gusts of over 60 mph," Capt. Steve Concialdi with the Orange County Fire Authority. "I like to say the firefighters did not lose these homes. The firestorm destroyed them. We had such intense winds and it was blowing the fire down all around here."
Report a correction or typo
Related topics:
ventura countysanta barbara countybrush firewildfirethomas fire
Copyright © 2021 KABC-TV. All Rights Reserved.
TOP STORIES
LAUSD to require COVID-19 testing for all students, staff
CDC document warns Delta variant spreads as easily as chickenpox
Garcetti signs plan to restrict homeless camps
Lakers to acquire Russell Westbrook, ESPN reports
Man beaten outside NoHo hookah lounge says attack was a hate crime
Great Park dropping reference to Orange County in its name
Dodgers finalizing deal to acquire Scherzer, Turner
Show More
Video: Fight breaks out on 60 Freeway in Ontario after crash
How to convince someone to get the COVID-19 vaccine
Downtown LA venues welcoming back concert fans
Lawsuit filed by families of 9 killed in accident off San Diego coast
Scarlett Johansson sues Disney over 'Black Widow' release
More TOP STORIES News