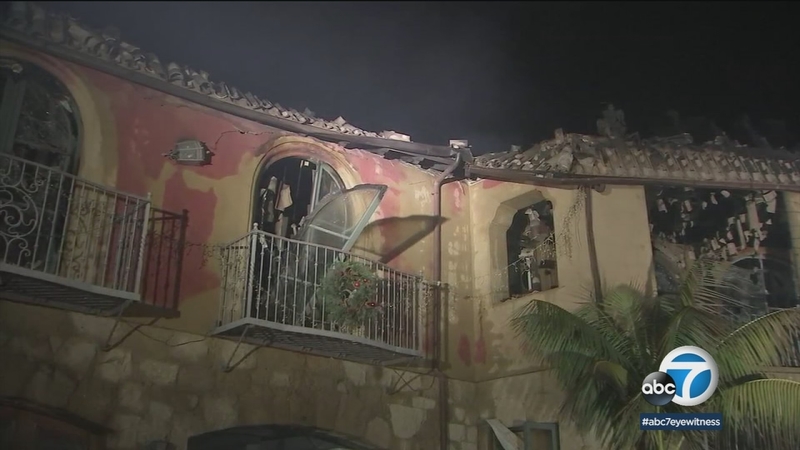 The size of the blaze inched upward to 270,500 acres and is 45 percent contained, Cal Fire officials said.

Mandatory evacuation orders remained in place for the foothill areas of Carpinteria, Montecito and Santa Barbara, as some 8,500 firefighters continued to battle the third-largest wildfire in California's history.

The Behrman family is one of three families who lost their homes in the blaze near Park Hill lane over the weekend. They returned home from Colorado on Sunday and found little of what was left of their house. Firefighters helped them save what they could from the debris.

The family evacuated a week ago and kept an eye on their home and firefighters through their security cameras, but when those suddenly went out, they knew they were in trouble.

Their home was destroyed Saturday morning, when the Thomas Fire came roaring back in the area due to a strong shift in the winds. Fire officials said there was little they could do to save the houses.

"We know the fire was close. We knew it was close for the whole week, but we really believed that it was going to be OK. This is incredibly hard to look at, but again, we're very appreciative of what everybody's done to try to protect the house," said homeowner Michael Behrman.

Crews were working to get a tally on how many homes were damaged in the area. One of those homes was the home where The Eagles recorded "Hotel California." The house was completely gutted and destroyed, but the famous studio escaped damage.

"We affectionately called this house "hotel California," and it is now closed for business until a later date," said Niki Byrne, whose family called the house home for 29 years.

About 18,000 structures remain threatened by wind-driven flames, which have destroyed 1,026 structures and damaged 242 others, according to Cal Fire. Among the razed structures were 756 homes.

Firefighters on Sunday were contending with powerful Santa Ana winds that at times prevented helicopters from making water drops.

"If you hold the compass up, it burned north to south, right down the canyons -- Romero, Cold Spring Canyon -- and it burned in and around a number of homes," said Capt. Steve Concialdi of the Orange County Fire Authority, one of many agencies involved in the firefight.

The cost of battling the inferno, which began on Dec. 4, has reached at least $110,286,500, Cal Fire said. Officials do not expect full containment of the fire until Jan. 7.