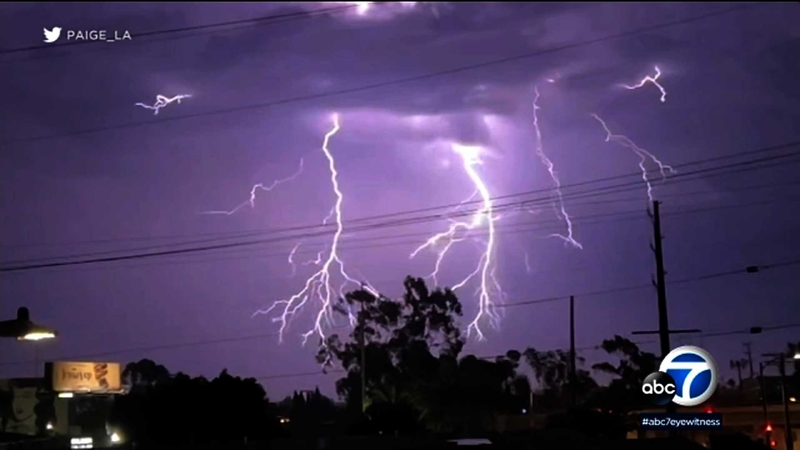 SIERRA MADRE, Calif. (KABC) -- Some Southern California residents woke up to a summer storm Wednesday morning that brought thunder, lightning and heavy downpours at times - creating a perfect opportunity to break out the cameras.

The wild weather - roaring booms of thunder and streaks of light cutting across the sky - was captured on video in the early morning hours.

Some of the hardest hit areas were the high desert regions, as well as the San Gabriel Valley and foothill areas. The thunder and heavy rain was certainly enough to wake some people up overnight.

"It sounded like guns... It sounded distant.. Somebody was fighting a battle far, far away. I felt like I was in World War I," said Kathleen Blanchard of Sierra Madre.

A lightning strike set a palm tree on fire in Lancaster Wednesday. A quick-thinking resident grabbed a hose and got the fire under control before flames could spread to other trees or homes.

The National Weather Service said the threat of dry lightning is low, meaning there is a low chance of wildfires breaking out as a result. If a fire is ignited, however, there is a chance the flames would quickly spread.

Still, the first monsoonal activity of the summer season is expected to be gone from the region by the weekend, making way for something Southern Californians are more familiar with: dry heat.

A woman and her dogs were killed by a lightning strike while out walking in Pico Rivera Wednesday morning, officials say.