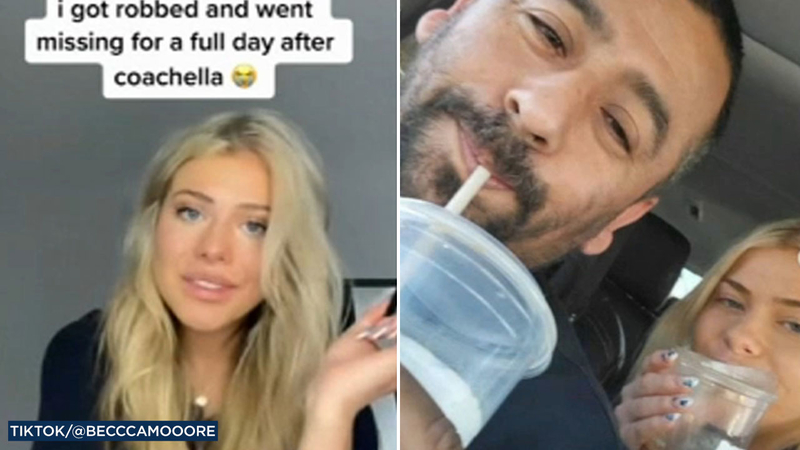 INDIO, Calif. (KABC) -- A popular TikTok influencer who was robbed at Coachella is now giving back to the man who came to her rescue.

Becca Moore used her following of 850,000 on the social media app to thank him in a special way.

Moore's videos have racked up more than 34 million views. Like so many other influencers, Moore made her way to Indio for the Coachella Festival just a few weeks ago.

But sometime during a private party, someone went through her bag.

"I went to check my phone and I didn't have it, and you know what else I don't have? My car keys or my credit cards -- so I'm stranded," Moore said.

Moore made it back to her hotel where they called an Uber for her the next morning.

Behind the wheel was Raul Torres.

Torres took Moore to a Sprint store to get a new phone, which did not work out. Then he took her to a police station where he helped file a police report for her.

He ended his Uber shift early, taking Moore to Starbucks while her mom used the Find My Friends feature to track the missing iPhone.

The unlikely duo made their way to a vacated Airbnb, where the thief had left Moore's phone and credit cards.

Moore believes Torres was her guardian angel that day.

"Yes, I think it's crazy," Moore said. "It was so comforting having him there because it felt like I knew him already.

During their time together, Moore heard all about Torres's family and his daughter Myra in high school currently battling cancer.

Randy Gonzalez, also known as Enkyboy on TikTok, said six months ago, a doctor told him he was a dead man. Now, he wants to warn young people to know the signs of colon cancer.

While flying home to Nashville, Moore put a plan into action and launched a GoFundMe for her new friend to help raise money to offset medical bills.

This past week, Becca flew back to California to spend time with Torres and got to meet his family.

Moore said they had the best day ever, and the family said she's stuck with them for life.

As of Tuesday morning, Moore's GoFundMe for the Torres family has raised more than $215,000.

After medical bills, Torres told Moore his dream has always been to open a taco shop.

Asked if Moore will ever go back to Coachella any time soon, she said "not a chance."

On International Holocaust Remembrance Day, the co-authors of "Lily's Promise" join "The View" to share why they decided to tell Ebert's journey from horror to hope on TikTok.