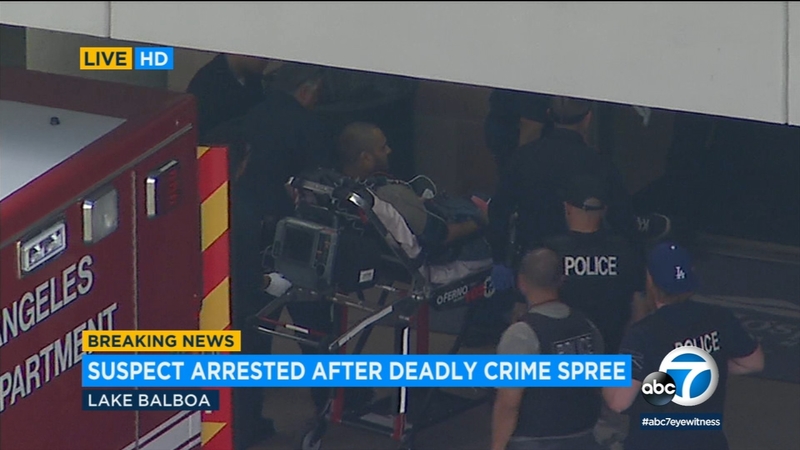 LAKE BALBOA, LOS ANGELES (KABC) -- Police announced the arrest of a murder suspect Thursday afternoon in Canoga Park, bringing to an end a massive manhunt after an hourslong crime spree that left four people dead -- including two of the alleged gunman's family members -- and two others wounded.

Here is a timeline of the deadly series of events that occurred at multiple locations across the San Fernando Valley:

2 a.m.: Los Angeles police officers respond to a triple shooting in the 21900 block of Roscoe Boulevard in Canoga Park, where Gerry Dean Zaragoza's father and brother are pronounced dead. The suspect's wounded mother is transported to a hospital.

2:45 a.m.: Two employees are shot at a gas station near Vineland Avenue and Vanowen Street in North Hollywood. A female victim, identified as an acquaintance of Zaragoza, dies of her wounds. A male victim is hospitalized in unknown condition.

A major manhunt in the San Fernando Valley has come to an end 12 hours after a murder suspect allegedly shot and killed at least three people and wounded several others.

Shortly before 8 a.m.: Officers swarm a Bank of America at Sherman Way and Topanga Canyon Boulevard in Canoga Park, the scene of the attempted robbery of a man who was using an ATM. The suspect, who matches Zaragoza's description flees before police arrive.

12:52 p.m.: A passenger on an Orange Line bus is shot and killed as the bus is exiting the Metro Woodley Station in Lake Balboa. A witness identifies the shooter as Zaragoza, and says the victim was shot in the head, police say. Officers descend on the area and establish a 10-block perimeter as the search for the suspect continues.

About 2 p.m.: Police take Zaragoza into custody in Canoga Park. He is conscious and does not appear to be seriously injured as he is placed on a gurney and into an ambulance, then transported away from the scene. A firearm is recovered, the LAPD says.