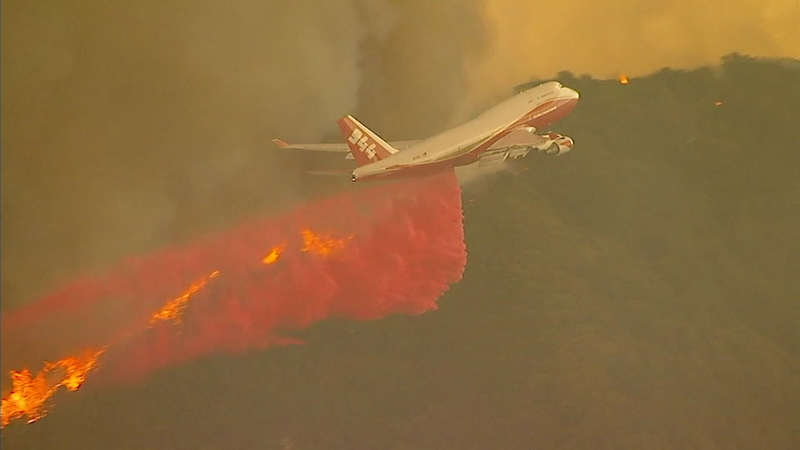 TRABUCO CANYON, Calif. (KABC) -- A fast-moving brush fire in the Cleveland National Forest prompted the evacuation of communities and campgrounds near Trabuco Canyon on Monday.

The blaze, dubbed the Holy Fire, was first reported around 1:30 p.m. near Holy Jim Canyon and Trabuco Creek roads - across the main divide between Orange and Riverside counties.

The Orange County Fire Authority initially said the blaze burned between 7 and 10 acres, and one structure was lost. Authorities said the fast-moving fire charred more than 1,200 acres by the late afternoon.

Evacuee Tilson Shumate and his wife live in the Holy Jim Canyon area, where they said they barely made it out alive.

"Fire travels faster than you think," he said. "It's an incredible sensation to be in this and to be faced with life and death. We think we're ready to die, but are we? I don't know, man. I don't want to go like this, Lord, get us out of here."

A Red Cross evacuation shelter was set up at the Bell Tower Regional Community Center, 22232 El Paseo in Rancho Santa Margarita. It was scheduled to close at midnight because no one had arrived at the shelter, but authorities said it would reopen if anyone needs shelter.

Communication towers at the top of a nearby hill were also threatened by the blaze, authorities said. Firefighters also mentioned the tough terrain that was making it difficult even for vehicles to access certain areas.

About 600 firefighters were on the scene with more than a dozen water-dropping aircraft and helicopters on the scene.

At least one cabin in the Holy Jim Canyon area were destroyed, but fire crews believe there may be more that are deeper in the canyon areas. Authorities said two Orange County Fire Authorities firefighters suffered heat exhaustion and were taken to a local hospital.

The fire was burning through medium fuel in the area and appeared to heading away from Orange County as it approached the county line near Riverside County by the early evening hours.