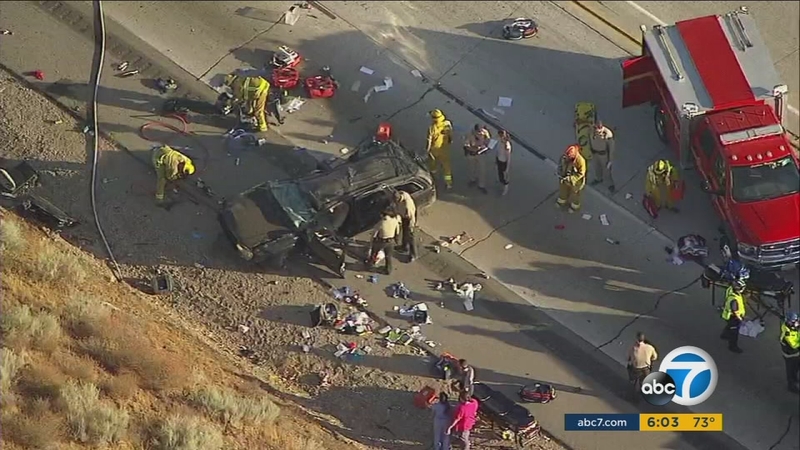 AGUA DULCE, Calif. (KABC) -- An 8-year-old girl and a 14-year-old boy remained hospitalized in critical condition Monday, days after three of their family members were killed in a crash on the 14 Freeway in Agua Dulce.

Karen Adams, 37, and two of her children - 1-year-old Kaitlyn Marie Crawford and 8-year-old Keion Lee Jones - died after being transported to hospitals. Keion's twin sister and a 14-year-old cousin were critically injured in the collision.

"It's hard to make sense. You say 'Why?' You'll never know why. Only that man up there knows why," said Johnny Jones, the twins' father. "So I try not to question that. I try not to even ask why, because I don't know what's in God's plan."

Jones said the two 8-year-olds, Kimora and Keion, were inseparable.

The fatal crash happened Thursday morning on the northbound 14 Freeway near Red Rover Mine Road. According to investigators, Adams was driving an SUV when it hit an embankment and overturned several times. One-year-old Kaitlyn was ejected from the vehicle.

"They lost their mom. I lost my son," Jones said. "She lost her sister. That's a tragedy."

The family has set up a GoFundMe page to help pay for the three funerals and for the survivors' extensive medical bills.

Meanwhile, Jones is facing the challenge of telling young Kimora that most of her immediate family is gone.