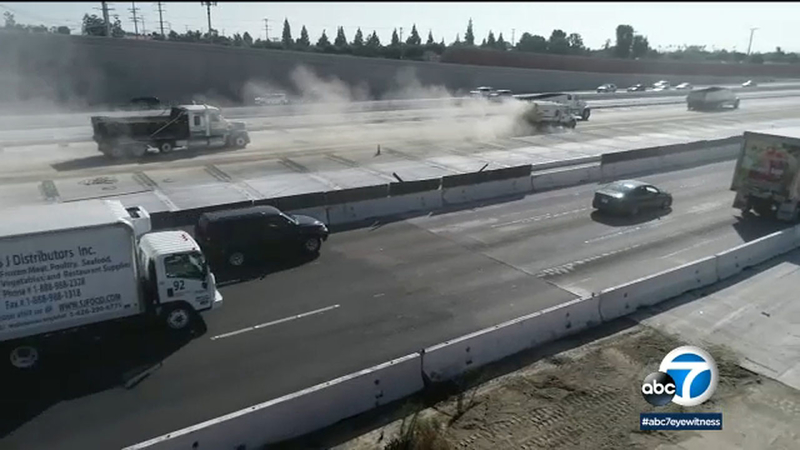 5 Freeway expansion project on track to alleviate gridlock by 2021

SANTA FE SPRINGS, Calif. (KABC) -- Most drivers in Southern California bold enough to brave the 5 Freeway during rush hour will tell you it's always terrible, but Caltrans hopes to help alleviate the gridlock by 2021.

Transportation officials said Tuesday that the expansion of the Santa Ana Freeway was coming to the rescue.

The California Department of Transportation will add two lanes in each direction of the major freeway from the 605 Freeway to the Orange County line.

"Where we used to have three lanes for most of the way between the 605 and Orange County line, it will now be five lanes in each direction, including a carpool lane," Bischoff said.

The improvements listed on the Caltrans website as part of the extensive construction undertaking include enhanced safety features such as pedestrian bridges, road surface repaving and carpool lanes to decrease traffic.

The tax-payer funded project comes with a $1.9 billion price tag, but it won't happen overnight. The project is in its eighth year of construction.

"The good news is on the southbound side, we've accelerated the progress on the Valley View interchange," Bischoff said.

The Valley View interchange bridge is one of 14 bridges extended to fit the newly widened freeway. The southbound side of the freeway is scheduled to be widened to four lanes by the end of this year, according to Bischoff.

And, he added, benefits of the construction work will spill onto the surrounding city streets.

"Imperial Highway and Norwalk where they run underneath the I-5, we're expanding those from four lanes to six lanes so we're improving the traffic for the cities as well as for the freeways," Bischoff said.