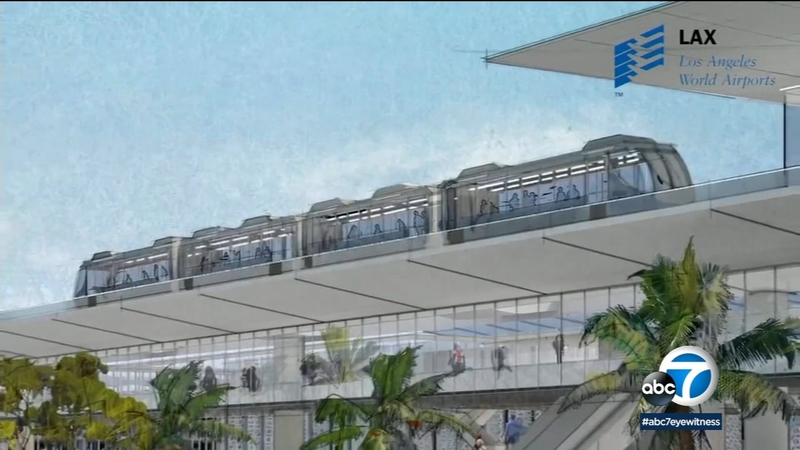 The electric train, scheduled to be fully operational in 2023, will connect travelers directly to airport terminals along with passenger pick-up and drop-off locations outside the Central Terminal Area.

The $4.9 billion project is expected to transform public transportation, reduce traffic congestion and deliver a world-class experience for travelers at LAX.

The people mover will operate on a 2.25 mile path with six stops. Three stops will be located outside the Central Terminal Area.

The APM will also connect travelers to the regional rail system and new rental car facility. It's expected to create 2,000 construction jobs.

"We can't have a truly world-class airport until we have public transit that brings people right to the terminals and we can't be a world-class neighbor to the communities around here until we confront traffic in a sustainable and responsible way," said Garcetti.

"I think it's a great idea because that way if you had to park far away, you can still get to your destination, to the airline you want to get to," said Urich.

"I think it's a great idea. There's so much congestion here. I mean half the time, you come to the airport and you don't know how long it's gonna take, so I think that's great to ease some of the congestion," said traveler Connie Roberson.

"The Automated People Mover is a historic investment in our city's transportation infrastructure - a milestone that will create middle-class jobs, reduce traffic congestion, and deliver a world-class experience for travelers," said Garcetti.

"Connecting Metrorail with the airport is going to be a game-changer - for travelers and for the people I represent who live near LAX," said Councilmember Mike Bonin.

"This project will take cars off of the road and improve the passenger experience by giving people a convenient, fast, and viable alternative to driving," explained Bonin.

LAX set an all-time record for passenger traffic in 2018, serving 87.5 million travelers, which was 3 million more than in 2017.

LAX is considered the second busiest airport in the nation, after Atlanta.

The contract with LINXS, the developer of the APM, is a public/private partnership - and the largest ever contract awarded in the city's history.