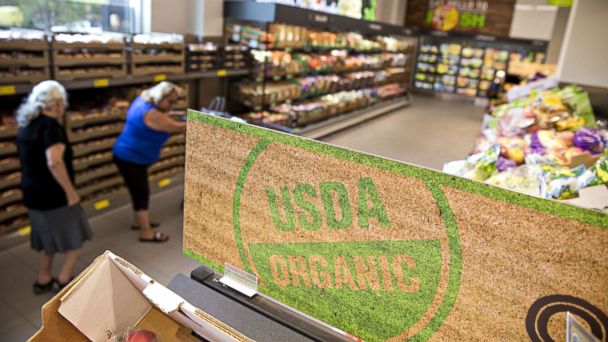 The Agriculture Department has withdrawn regulations that would have required higher production standards for organic livestock and poultry beginning in May - known as the animal welfare rule - a move animal rights groups condemned as a "travesty" and an organization representing organic farmers and consumers called "unconscionable."

In the latest effort to rescind Obama-era regulations, the Trump administration is doing away with a directive aimed at standardizing the way animals are treated on organic farms if their meat is being sold under a "certified organic" label. The rule was finalized in April 2016 and published in January 2017.

"A lack of clarity in organic livestock and poultry standards has led to inconsistent practices among organic producers," according to a USDA fact sheet. "This action assures consumers that organically produced products meet a consistent standard by resolving the current ambiguity about outdoor access for poultry. It also establishes clear standards for raising, transporting, and slaughtering organic animals and birds."

The Trump Agriculture Department delayed the rule - which would have made organic regulations more specific - three times before ultimately withdrawing it. USDA Marketing and Regulatory Program Undersecretary Greg Ibach says the department's resistance to the rule stems from the regulatory authority it granted USDA.

"The rule would have increased federal regulation of livestock and poultry for certified organic producers and handlers," Ibach said.

"The rule exceeds the Department's statutory authority," he added. "The changes to the existing organic regulations could have a negative effect on voluntary participation in the National Organic Program."

Among those that backed the USDA's move is the American Farm Bureau, arguing it will keep more farmers in the organic farming business.

"Had the rule gone into effect, we believe it would have forced a number of organic farmers and ranchers to just basically change their production practices and it likely would have forced many of them either out of the organic sector, if not out of business," said AFBF Public Policy Executive Director Dale Moore in a statement.

However, the USDA's withdrawal of the animal welfare rule triggered a backlash from farmers and animal rights groups as well as the organic community.

"USDA's action to withdraw the... rule is a mistake," said National Farmers Union President Roger Johnson in a statement. "It puts them on an uneven playing field with the types of operations who skirt the rules, yet also benefit from the same USDA organic label."

Joining the NFU in challenging the USDA is the Humane Society, along with its broad and diverse constituency, including both smaller family farmers and the non-organic producer Perdue Farms. The Humane Society's Senior Advisor of Equine Protection & Rural Affairs Marty Irby asserted that the USDA's order to end the mandate will defend "a small number of large producers, not a large number of small producers."

The Humane Society, which called the reversal in policy a "travesty for millions of animals raised within the organic system," is exploring "every potential legislative and legal opportunity in the court system" to protect the welfare of animals and the integrity of the organic sector, according to Irby.

Under the withdrawn regulations, outdoor access was defined more clearly, specifically for egg-laying hens that require outdoor pens. Covered porches and similar enclosed structures, such as a wire-caged pen with a concrete floor, would not have qualified as outdoor pens. "Most consumers probably don't realize that some of the organic eggs they are purchasing are from chickens that don't actually go outside but rather are in cages indoors," Irby said.

Another animal rights group, the ASPCA, also strongly rebuked the USDA, expressing outrage over what it said would be millions of animals affected by eliminating the rule.

"The USDA's withdrawal of the OLPP is a violation of the public trust that reverses the nearly two decades of collaboration and feedback from farmers and consumers that led to this groundbreaking rule," said Matt Bershadker, President and CEO of the ASPCA in a statement. "Millions of animals will continue to suffer each year because of the USDA's abdication of its duty to enforce meaningful organic animal welfare standards."

The Organic Trade Association - the group behind an ongoing lawsuit against the USDA - condemned their latest action.

"This most recent egregious attempt by the Department to ignore the will of the organic industry and consumers does not halt our judicial review, but, in fact, furthers our resolve," said Laura Batcha, CEO and Executive Director of the Organic Trade Association in a statement. "USDA's unconscionable action does not deter us."

OTA filed the lawsuit in September 2017 to keep the organic standards, alleging that the USDA violated the Organic Foods Production Act.

"Since the filing of our lawsuit last September, a host of organic stakeholders representing thousands of organic farming families, organic certifiers and organic policymakers - along with leading animal welfare and retail groups speaking out for millions of consumers - have joined our challenge," added Batcha. "It is time for the organic community to insist that it live up to its responsibility."