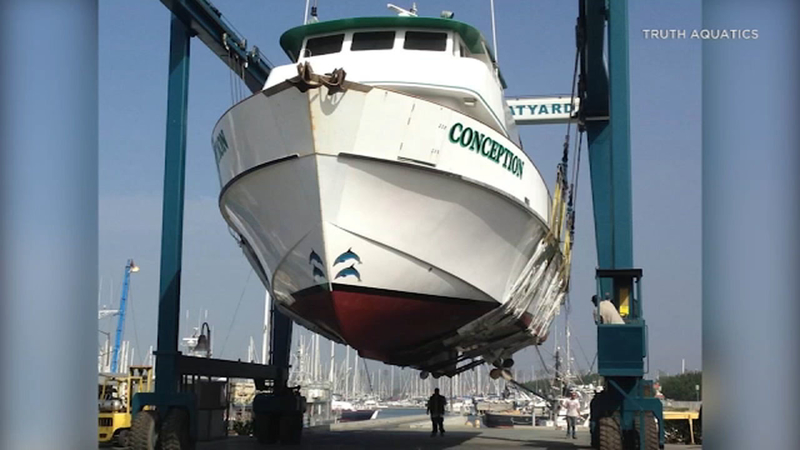 SANTA BARBARA, Calif. (KABC) -- Truth Aquatics, the operator of the boat involved in a deadly fire off the Ventura County coast, has an excellent reputation in the industry and kept the vessel in good shape, according to people familiar with the company and its owners.

There were 39 people - six crew members and 33 passengers - on board the Conception when it caught fire and sunk early Monday morning just off Santa Cruz Island. Five crew members were rescued, eight deaths are confirmed and the remaining 26 are considered missing as of early Monday evening.

People gathered at Truth Aquatics headquarters in Santa Barbara to exchange hugs and tears, and wait for news about missing family, friends and coworkers.

Asked if they had heard any news, most just grimly shook their heads and walked away.

Eyewitness News talked to divers who were familiar with the boat and the company. They all say Truth Aquatics is one of the best dive boat operators.

Tony Gonzalez came by to toss flowers into the water near the Conception's dock space to pay his respects. He said he has friends who work the boat.

"Very dedicated people," Gonzalez said. "They were cleaning the boat yesterday. You never know what could have happened. It sounds like the kitchen had something to do with it once the gases start going. And people are asleep and they're all downstairs and they couldn't get out."

The investigation into the cause of the fire is just beginning.

In the meantime, the American Red Cross has set up a family assistance center a few miles from the dock. There will be mental-health support, clergy members and representatives of the sheriff's department onsite to help with family and friends of victims.

"It's a place where they can come to get information, to get resources, to get counseling support, to get linkage to support," said Suzanne Grimmesey with the Red Cross.