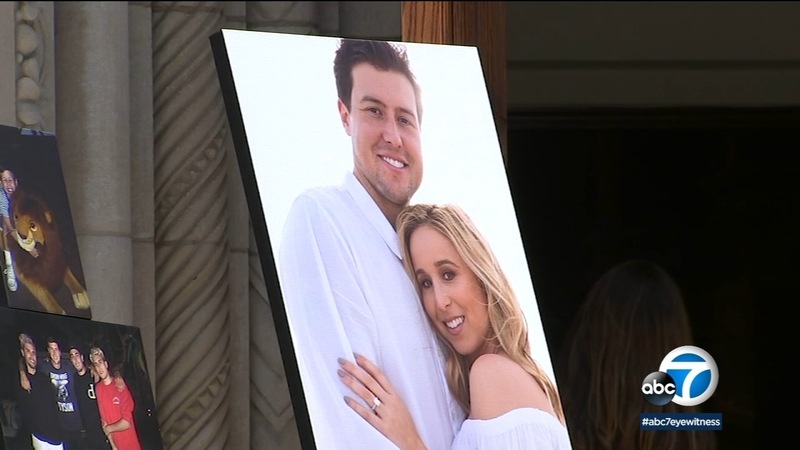 Family members and teammates gathered with heavy hearts at St. Monica's Catholic Church in Santa Monica. The entire team was expected to attend the service, which was closed to the public.

Skaggs, 27, was found dead in his hotel room in Texas during an Angels road trip series on July 1.

Police in Southlake, Texas, said they were investigating but no foul play was suspected. An autopsy has been conducted, but a final report is not expected to be released until October.

Skaggs grew up in Santa Monica, not far from where the church service was held. He played baseball at Santa Monica High School.

Friends and family described him at the service as the best friend a person could wish for, a dedicated family man who loved his wife, his family and his team.

"I will love you until my last breath, until we are together again. Miss you babe," his widow, Carli, said.

A moment of silence was held for Skaggs prior to the first pitch in the July 2 game against the Rangers. All teammates stood in silence with the No. 45 placed on their jerseys over their hearts. The No. 45 was also painted on the back of the mound where his teammates played their first game since the pitcher's death.

The team, in a statement, called Skaggs "an important part of the Angels Family" and said its thoughts and prayers were with his wife and entire family "during this devastating time."

It's not the first time the team and its fans have felt heartache. Ten years ago, rookie pitcher Nick Adenheart was killed by a drunk driver. Many fans say Skaggs' death has brought back all those emotions - young stars of the game, gone too soon.

Skaggs' death has touched people all over Southern California. He grew up in Woodland Hills and graduated from Santa Monica High School, where his mother, Debbie, was the longtime softball coach.

Skaggs, who got married last December and would have turned 28 on July 13, had been a regular in the Angels' starting rotation since late 2016, when he returned from Tommy John surgery. He struggled with injuries repeatedly in that time but was 7-7 with a 4.29 ERA in 15 starts this season to help an injury-plagued rotation.