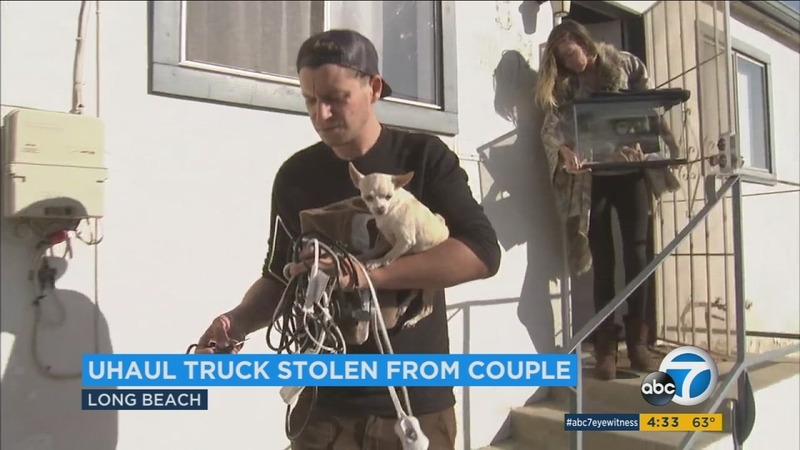 LONG BEACH, Calif. (KABC) -- Jared Pettinato and Alicia Shabra are left with the clothes on their back, a computer, their little dog and an aquarium holding their pet lizard.

"I'm still in shock," said Shabra, 25, a fashion student. "I couldn't even cry because I didn't know how to react."

The two had packed up a rented U-haul and their car and parked it outside their home on the 300 block of Flint Avenue in Long Beach.

They planned to get a few hours sleep before leaving for Oregon to start a new life.

"When we went outside the entire U-haul and our car was completely gone," said Shabra.

She said she lost vintage clothes, jewelry, bags and sentimental items, including letters from her late grandmother.

Pettinato said he, too, lost treasures.

"I have artwork and different pieces from Africa and Iceland and India and tapestries," said Pettinato, 29, a professional tour manager.

About 10 hours later their car turned up, still on the rented trailer a couple of miles from their home.

Then a few hours later their now-empty U-haul was found in North Long Beach. The thieves took everything except a pair of sandals.

Pettinato said they had insurance for the U-haul, but he didn't realize it didn't cover contents.

Without renters insurance, they say they're out about $60,000 worth of belongings.

"I don't know how people like that can sleep at night," said Shabra, "knowing they took someone's entire life from them... everything they own."

"It's just sad to see the evil in people," said Pettinato.

They set up a GoFundMe page.

They hope to raise enough money for the necessities, as they hit the road for Portland for what they hoped would be a happy fresh start.