Protests and walkouts were staged at multiple University of California campuses on Monday over the cost of college education.

LOS ANGELES (KABC) -- Protests and walkouts were staged at multiple University of California campuses on Monday over the cost of college education.

Students took to social media to organize their demonstrations, which began around noon at UCLA, UC Berkeley, UC Davis and UC Santa Cruz. At some campuses, over 1,000 students pledged to participate. No violence or arrests were reported.

Last week, the UC Board of Regents approved tuition increases of as much as 5 percent in each of the next five years unless the state devotes more money to the 10-campus system.

Gov. Jerry Brown has been against the hikes, saying the UC system needs to budget its money better. The governor has proposed a 4 percent annual increase in funding, but UC President Janet Napolitano says it's not enough. 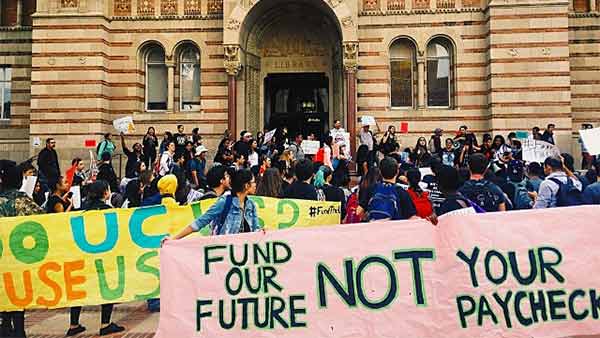