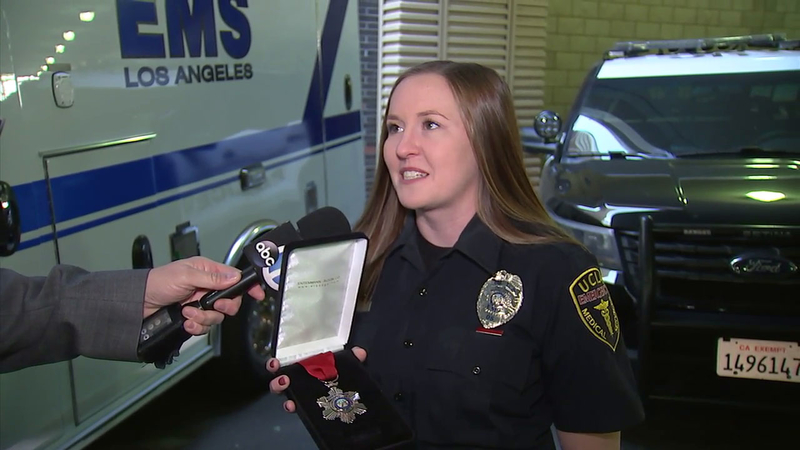 WESTWOOD, LOS ANGELES (KABC) -- An EMT at UCLA who was at the Las Vegas shooting is being honored for her bravery helping victims of the mass casualty incident.

Brittany Speer was at the Route 91 Harvest music festival on Oct. 1 with her family and friends when the shooting started.

"Like I told everyone it was the most fun weekend of my life that ended up being the most terrifying night of my life," she recalled.

That night, gunman Stephen Paddock opened fire on the festival crowd from a room on the 32nd floor of the Mandalay Bay, killing 58 people and injuring more than 500. He fired more than 1,000 rounds during the 10-minute shooting spree before turning the gun on himself.

Speer's father was shot in the lower back and has since recovered. Her mother was not wounded and the family managed to escape the concert grounds.

But despite the potential danger of additional shots being fired, Speer used her EMT training to set up a triage area and treated a number of people.

"I didn't know if there was a threat, if the threat was still active," she said. "I knew I hadn't heard shots in a while. I really didn't think about my own safety at that time. I was just thinking about the safety of others."

Speer's bravery was recognized recently with a Medal of Courage from the UCPD, the only civilian at UCLA emergency services to get that honor.

"She just jumps in, does what she does," said her father, Greg Speer. "And it's done and we don't talk about it. But as a father, oh boy - couldn't be more proud of her."

UCLA's Emergency Medical Services is unique in that it is mostly run by students. Many of them will go on to careers in the medical field or become first responders.