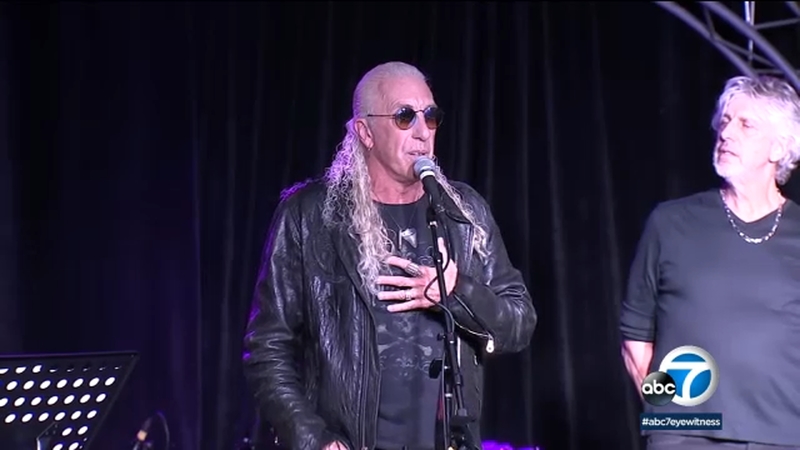 AGUORA HILLS, Calif. (KABC) -- Musicians and celebrities gathered in Agoura Hills Monday for a concert to raise money and awareness for the people of Ukraine.

Dee Snider of Twisted Sister and actor-musician Rob Morrow were among the performers at the event.

The concert was held at BL Dancehall and Saloon. That business was opened in 2020 by the owners of the Borderline Bar and Grill in Thousand Oaks, which was closed after the deadly mass shooting in 2018.

"I can't imagine a better place than Borderline to heal and to bring awareness to people about the importance of unity and community, and getting together to get a message out that we're here," concert organizer Ken Greene said.

Snider, who MC'd the show, said he has Ukrainian roots.

"I am the grandson of the Ukraine. My grandfather was Ukrainian," Snider said.

The Los Angeles City Council voted to begin the process to adopt the Ukrainian capital of Kyiv as a Los Angeles sister city, which would allow L.A. to send Kyiv retired goods such as fire trucks and ambulances.

For Snider the benefit was both about his personal connection and a way to send a clear message.

They said it's the least they could do to show their support for Ukraine.

"It's a small thing but it reverberates and if enough people take little action like this, aside from the money that we're going to raise, it raises awareness so I didn't even think twice. I'm happy to be here," actor and musician Rob Morrow said.

All of the money raised at the concert goes to Save the Children's Emergency Children's Fund to help the youngest victims of the war.