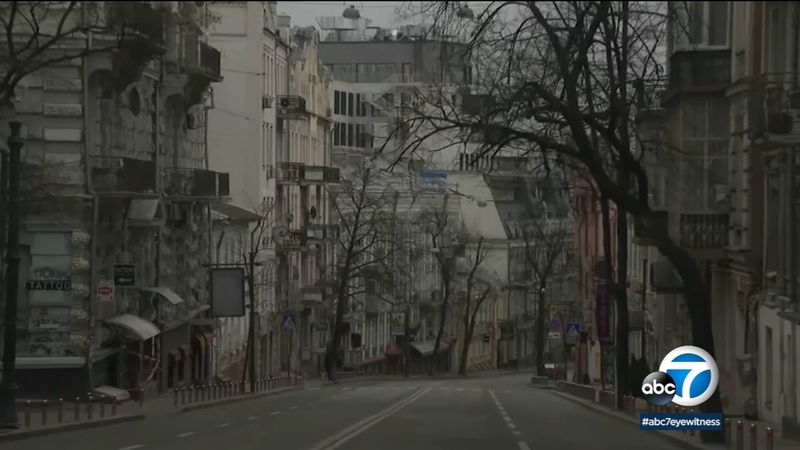 LOS ANGELES (CNS) -- The Los Angeles City Council voted Friday to begin the process to adopt the Ukrainian capital of Kyiv as a Los Angeles sister city, which would allow L.A. to send Kyiv retired goods such as fire trucks and ambulances.

The motion, presented by Councilman Joe Buscaino, acknowledges that it is "literally the last thing on the minds of the leaders of Kyiv'' -- but it calls for initiating the sister city process now as a sign of support for the Ukrainian capital amid Russia's invasion.

Buscaino added that the designation has the potential to bring benefits to Kyiv, noting that Los Angeles sent surplus Los Angeles Fire Department engines and street services vehicles to its sister city Beirut, Lebanon after the Aug. 4, 2020 explosion at its port.

The motion seeks to expedite the process, which typically takes about a year and includes a formal ceremony with both sister city governments. A timeline for a potentially expedited process was not immediately available, but the motion states that moving forward with the designation "means the city (of L.A.) can more easily provide aid to Ukraine in the months ahead.''

Buscaino spoke before the vote Friday, saying, "We have all watched in horror as the Russian military invaded the sovereign nation of Ukraine and continues the slow advance of the Ukrainian capital Kyiv.

"Even as local leaders, we want to say something, to do something, and to act towards a collective disapproval of this assault on humankind, endeavoring to make a positive difference in this critical moment in world affairs,'' he added.

Biden delivers message to Ukraine amid war with Russia: 'We stand with you. Period.'
EMBED More News Videos

Watch the complete speech given by President Biden in Poland, wrapping up his trip to Europe amid the war in Ukraine.

The motion was seconded by Councilwoman Nithya Raman and Councilmen Paul Koretz and Mitch O'Farrell.

The next step in the process is to establish a steering committee that includes Ukrainian Americans in Los Angeles. Buscaino said anyone interested in joining the committee can contact his office or the chief legislative analyst at (213) 473-5709.

On March 8, the council unanimously approved a resolution to strongly condemn "the egregious actions of (Russian) President Vladimir Putin for ordering the invasion of Ukraine.''

The resolution -- which was led by Councilman Paul Koretz and introduced by five council members -- also includes a call for international or federal divestment of all holdings from and investments in Russia.

It further condemns Putin's actions and those of any country that supports Russia, or supports publicly traded Russian companies, real estate or private equity.